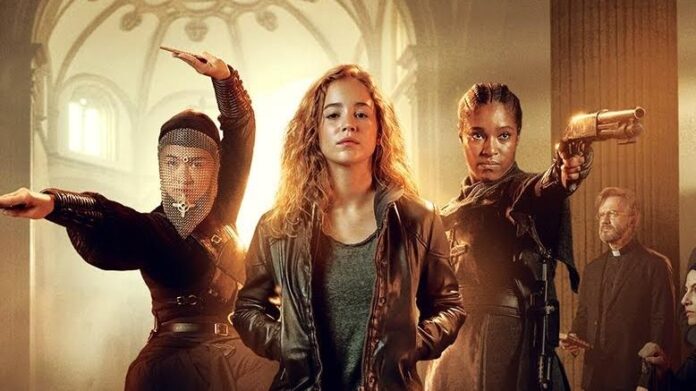 Every generation a champion is selected, gifted with superpowers, and fights the forces of evil. If this sounds eerily similar to Buffy The Vampire Slayer, you’re not alone. I wouldn’t be surprised if Netflix’s algorithm saw your viewing habits (when they had the license to the cult vampire show), and decided to give it the remix treatment. Based on Antarctic Press’ “Amerimanga” comic book “Warrior Nun Areala” by Ben Dunn. Netflix’s Warrior Nun introduces a world where there’s a secret order within the Catholic Church called the (fictional) Order of the Cruciform Sword (not to be confused with the Brotherhood of the Cruciform Sword from the third Indiana Jones movie) that is dedicated to fighting for forces of darkness from hell.

Every generation, the Order of the Cruciform Sword chooses a champion to be granted “the Halo,” which is literally an angel’s halo and gifts the user with supernatural abilities to lead the order against spiritual enemies on earth. This story begins with Ava (Alba Baptista), a recently deceased quadriplegic who is accidentally gifted the Halo by members of the church to hide in her lifeless body in a church morgue to hide the sacred artifact it from demons. Ava miraculously returns to the world of the living and is slowly enthralled in the world of the supernatural and the secret order that protects our world from them. 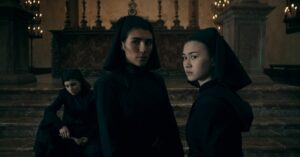 With each episode of Warrior Nun’s 10-episode first season is titled after a bible verse that pretty much signifies the theme of the particular episode. For example, the first episode of Warrior Nun is titled “2 Corinthians 10:4,” which translates to “the weapons we fight with are not the weapons of the world. On the contrary, they have divine power to demolish strongholds.” Throughout the first season, Ava goes through various stages of Campbell’s Hero’s Journey. At first, the freedom that comes from a new life, one where she is able to use her legs and arms, which she lost at a young age from a car accident. She gets to finally experience life for the first time, make friends, and gets drunk. Oh, but she can also see astral projections of demons infecting everyday people to do evil, much to her confusion. In addition to astral demons, there’s also a giant physical demon that wants the Halo and is murdering everyone in its path to get it.

This brings her to the attention of two groups: The Order of the Cruciform Sword and a corporation that has been looting an otherworldly biblical metal called “Divinium” from the Church in order to try and create a dimensional portal to heaven (or is it hell?). The order wants Ava to become the new leader of the nuns, and the corporation led by Jillian Salvius (Thekla Reuten) wants her because he newfound powers “activate” their technology. Jillian has her own selfish reasons for wanting to learn more about the Halo. At the church, she is taken in under the tutelage of Father Vincent (Tristan Ulloa) and befriends Young Sister Beatrice (Kristina Tonteri-Young) and Shotgun Mary (Toya Turner) who take Ava under their wing while she has a contentious relationship with Sister Lilith (Lorena Andrea) whose family has been a part of the order for centuries and was next in line to receive the Halo. 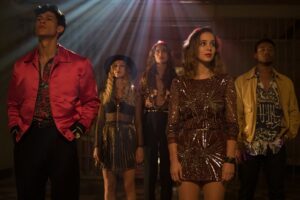 Having Ava as the protagonist of Warrior Nun proves to be interesting. Ava is a tragic victim, who after becoming paralyzed is tortured in the Catholic foster care system by a sadistic nun and therefore ends up being a foul-mouthed atheist, who was now potentially in charge of leading the Church’s army against the forces of darkness. Naturally, she’s hesitant to get involved at all, but soon enough realizes that there are things bigger than her, which allows her to mature as a character through the 10 episodes of the season. Very similar to Daybreak (another Netflix comic adaptation), Ava often breaks the fourth wall via voiceover to allow the audience to know her innermost thoughts, which works effectively throughout the series. The only complaint about this is showrunner Simon Barry doesn’t consistently use this through the first season as there are moments where the voiceover goes away for episodes on end. 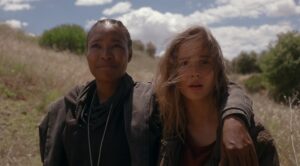 Although Alba Baptista is great as Ava, the real MVP of the show is Toya Turner as Shotgun Mary. The lone woman of color in the order, she doesn’t really fight as she even says, she doesn’t need to be skilled at combat when she has two shotguns. Shotgun Mary seems to have the most depth of all the characters and actress Toya Turner does a great job. Speaking of the fights, there aren’t as many as one would hope for, but when they do have fight scenes, we get to see exactly why these nuns are in charge of safeguarding humanity as they are expertly choreographed. 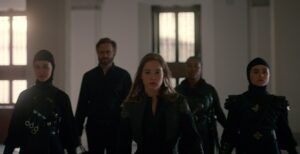 The season feels a little uneven as at first it seems to be an almost X-Men-like origin story for Ava as she learns to use her newfound powers, become the leader of the nuns, and will eventually fight a giant hellfire demon.  However, Warrior Nun zigs instead of zags and the latter half of the show explores a conspiracy within the Catholic Church that is for more entertaining than just shooting spirit demons with Divinium weapons. The introduction of Cardinal Duretti (the always sinister Joaquim de Almeida) shows the shady politics of organized religion as well. The last two episodes completely take a left turn as it not only explores the origin of the original Warrior Nun, but challenges Ava (and the audience for that matter) on how we view our religious iconography to define what is good and what is evil and tells the audience that things, unfortunately, aren’t so black and white, but rather “messy.” The last 10 minutes of Warrior Nun has a twist old school M. Night Shyamalan would be proud of and almost dares Netflix to cancel it after a massive cliffhanger. Netflix please don’t cancel like you did Daybreak, V Wars, or October Faction: all supernatural genre shows that were canceled with cliffhangers.  Warrior Nun absolutely works very well and needs a second season!

‘The Umbrella Academy’ Season 2: The World Is Ending Again In Opening Clip