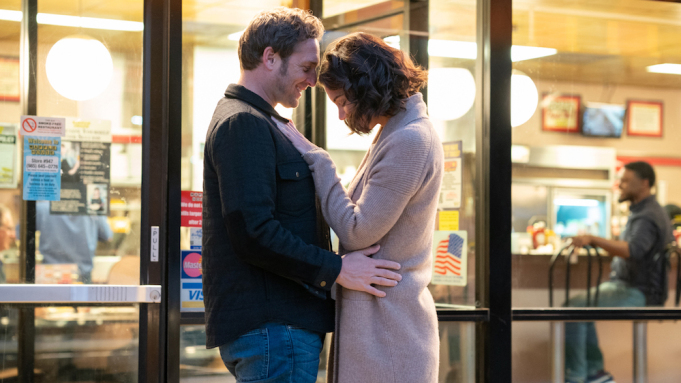 Miranda Wells (Katie Holmes) is a hardworking young widow who’s struggling to raise three children on her own. A powerful storm soon brings a devastating challenge and a mysterious man, Bray Johnson (Josh Lucas), into her life. In just a few short days, Bray’s presence reignites the family’s spirit — but he carries a secret that could change everything.

The premise of Andy Tennant’s The Secret: Dare to Dream is most certainly nothing groundbreaking or innovative regardless of the genre. It’s a romance film at its core, which I usually don’t enjoy but there are a few exceptions to the rule. One of my personal favorites in recent years is Susan Johnson’s To All the Boys I’ve Loved Before, which surprised me because it was a genuinely fun and sweet teenage romance film of all things.

Sadly though, Dare to Dream is not sweet or fun to watch. It’s extremely boring for the most part and goes down a disappointingly predictable path that you can see coming a mile away. I honestly can’t even see hardcore romance film fans getting much enjoyment out of this one.

I don’t know about you, but one of the most annoying film tropes of all time, in my opinion, is the “Mr. Perfect” trope. I’m sure you know what I mean, but in case you don’t, let me explain quickly. It’s when you have a major male character in a film, typically somebody’s love interest, and for some reason, this guy is absolutely flawless in everything he does. He works at a high-paying job and is successful, is so sweet that he will go out of his way to help people on the street, brings home flowers to his girlfriend/wife every day, and can essentially do no wrong. That’s what Josh Lucas’ character in this film is like.

It’s frustrating when a movie does this because it makes me instantly detach from that character. Characters should have flaws and imperfections that they have to overcome by the time the third act comes to a close, but here, Lucas’ character Bray doesn’t have anything to overcome. Neither does Katie Holmes’ Miranda. The character development on display is extremely weak and almost non-existent.

But since we are already talking about Holmes and Lucas, I have to admit that their performances here are actually quite good. Even if you’ve never seen another movie starring either of these actors before, it’s quite obvious here that these are two highly talented people, but for whatever reason, they agreed to be in a bad movie. As good as Lucas is here, Holmes takes the cake for the best performance. She is able to convey sadness, happiness, and other emotions remarkably well in this film. However, it did make me wish I was watching this performance in a different movie.

Every once in a while the film does have some funny one-liners spouted in between various different dialogue exchanges, but that’s not nearly enough to make this a good movie. It has some good performances, some okay jokes, and the camera work is also not too bad, but there were two things missing that make this movie boring and bad – a good, interesting script and characters with development.

‘The Secret: Dare To Dream’ Trailer: Katie Holmes Learns To Think Positive In Drama Based On The Self-Help Bestseller

‘Brahms: The Boy II’ Trailer: The Creepy Doll Is Back To Haunt Katie Holmes