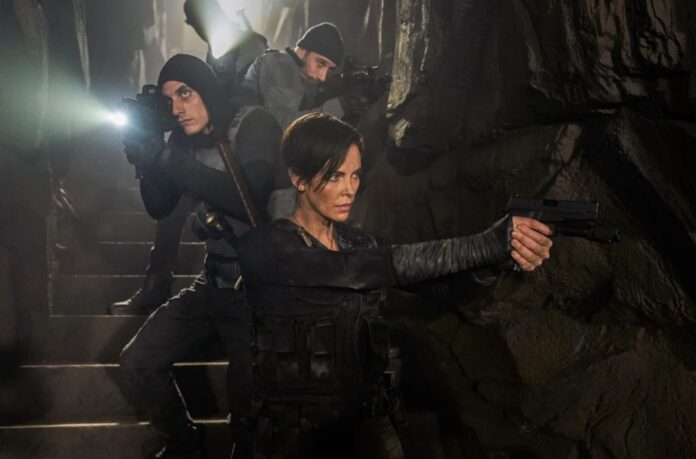 Netflix has been putting in the big bucks over the last year or so to turn itself into a destination for the kind of widescreen, blockbuster action movies we usually pay to see in theaters. And so we’ve had the occasional decent action flick, like Extraction, and the occasional stupid dumb flick like 6 Underground, which are watchable but sorta forgettable. Leave it to the team of Charlize Theron and director Gina Prince-Bythewood to deliver the complete package with The Old Guard, which manages to have the top-shelf action we’re craving while building a fresh cinematic world we want to spend forever in.

A modern day Highlander that, like that classic franchise is unafraid to embrace its bleaker aspects, The Old Guard stars Theron as Andromache the Scythian, but please just call her Andy. Just don’t ask her age. Andy has been around for millennia, living an eternal life of combat. Along the way she has met others like herself who share the gift/curse of immortality: Matthias Schoenaerts is Andy’s closest companion, Booker, and the guy who finds missions for them to take; Aladdin‘s Marwan Kenzari and Luca Marinelli are lovers Joe and Nicky, who have stuck by one another’s side for ages. It’s a tiny group, so there’s no “There can be only one!!!!” hijinks between them. They fight together, often die together, but they always look out for one another.

When we first meet the team, their latest mission turns out to be a trap.  Surprisingly for a bunch of immortals, this couldn’t come at a worse time. Andy is feeling lost that the hundreds of years she’s spent fighting for good causes have amounted to nothing. The world is only getting more, there’s more death, more suffering than ever, and she was there at the damn Crusades! She was there at the Salem witch trials! The mysterious government agent Mr. Copley (Chiwetel Ejiofor) has found out their secret, and has joined with an unscrupulous pharmaceutical company CEO (Harry Melling) to capture them and steal their abilities for sale on the market.

While The Old Guard could very easily be a smash ’em up movie with Andy and her crew battling waves of enemies all across the globe, there’s so much more here than that. The film is based on the graphic novels by screenwriter Grug Rucka, and he creates characters that are sympathetic and believable beyond their remarkable powers. If Beale Street Could Talk’s Kiki Layne is the best of these characters, Nile, a Marine who learns two things the hard way: 1. that no good deed goes unpunished, and 2. oh yeah, that she can’t be killed.  Nile’s emergence attracts Andy and the others, with the team trying to convince the newbie that her old life is over…just as someone is trying to kill them all.

Rucka’s script delivers action and characterization in equal measure, and that’s important when you’re dealing with people who can do superhuman things. While we’ve seen movies touch on the burden of immortality, The Old Guard really digs in and gives each character a different perspective on their long lives. Andy has been around so long and lost so much that she doesn’t know if everything was worth it. She’s especially hard on Nile, to impress on her just how difficult things are going to be. But at the same time, Nile has a family she doesn’t want to just leave behind, and just as important is the sense of duty she feels as a Marine. How does one just give that up? How do you just turn that part of you off?

Even better are the characters of Joe and Nicky, who frankly need their own side movie or spinoff.  It would be easy for the film to brush aside the gay duo, introduce their love and then leave it off the table, but The Old Guard instead treats their romance as integral, vital. They’ve spent an eternity together, enduring centuries of mistreatment for their feelings, and it has built a bond that makes their every moment together special. But there’s a flipside to it. We come to feel so much for them that when they’re in trouble, we truly ache at the idea of one being separated from the other. There’s a scene, during a moment of torment, when Joe expresses his deep love for Nicky with such force of passion it’ll bring tears to your eyes. You don’t expect that kind of thing from The Old Guard but that’s just one reason why this movie is special.

While the character-building and mythology surrounding these characters is so rich, the villains they face need a lot of work. Ejiofor’s role is one that could have been played by any actor, not one of his caliber. And Melling as an evil pharmaceutical rep may sound like it’s ripped from the headlines, but it’s also not particularly imaginative and Melling is hardly threatening. The biggest threat the immortals face is the fear within themselves.

The Old Guard is an expert action film from an expert cast and crew, and they confidently lay the groundwork for what could be a long run of sequels for Netflix. If that happens, you can count me in for the long haul.