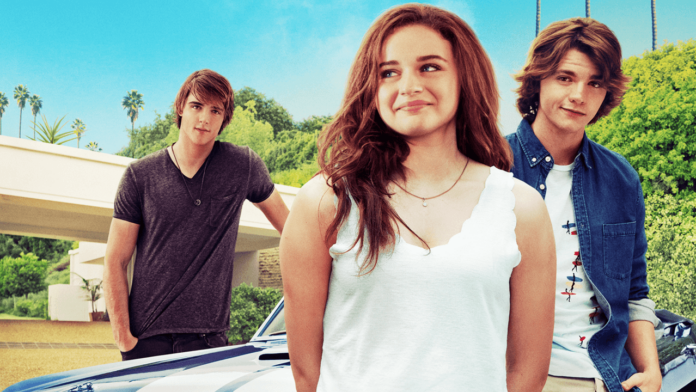 In 2018, Netflix introduced their “Summer of Love,” where each month from May to September a new romantic movie was set to premiere on the streaming site. Some were good (To All the Boys I’ve Loved Before), some were problematic (Sierra Burgess is a Loser), some underrated (Ibiza), but none could compare to The Kissing Booth. The rom-com of the summer, millions of Netflix users watched a brilliantly overacted and over the top love teen love story mainly because of Jacob Elordi’s abs. If you don’t believe me go to Buzzfeed and search for The Kissing Booth. See? It captured the attention of teens and young adults for months.

Its sequel, aptly titled The Kissing Booth 2, premieres this weekend, continuing the story of Elle (Joey King) and her love life. Now a senior, she is still dating her best friend’s brother Noah (Jacob Elordi) though new guy Marco shows up to threaten that. Her BFF Lee (Joel Courtney) is struggling with managing his friendship with Ellen and his new relationship with Rachel (Maganne Young). Everyone is struggling with their futures, deciding where to go to college, while Elle pines for her boyfriend, who is attending Harvard.

The Kissing Booth 2 literally packs every single teen movie troupe into a very long 2 hours and 12 minutes. We’re talking dance competitions, multiple love triangles, not having enough money for college, not knowing where to go to college, an identity crisis, accidentally admitting how hot someone is, thinking someone is cheating on you. The only thing missing from it is someone making a bet that they can’t make it with the ugly girl and then falling in love with her. Despite this, the acting does feel less melodramatic this time around. Don’t get me wrong, there’s a lot of unneeded teen drama, but compared to the first, this go-round is much better acted.

Part of that is due to Jacob Elordi’s performance. Since the first one, the Australian actor has cut his teeth in HBO’s Euphoria, an exceptionally well-done look into the private lives of teenagers. It could be that the prestige of the show has rubbed off on the young actor, but his performance is more subtle and less cringy this go-round. Because his character is at college for most of the movie, Joey King’s unbridled joy doesn’t get as eclipsed by his brooding.

The thing about The Kissing Booth 2 is that if you liked the first one for whatever reason, you should like the second one. Like most sequels, it’s essentially just an extension of the first one with forty-five more minutes of fan service. And the film knows this. It spends very little time catching up the audience or anyone who hasn’t seen the first one. It just dives right in, knowing that the people watching the second one was obsessed with the first. And you know what, let them have it. 2020 has been awful for everyone, so I feel like we should just let Kissing Booth fans have this one. If they can find some joy for 2 hours and 12 minutes, let them have it.

You can watch The Kissing Booth 2 on Netflix and catch the trailer below.