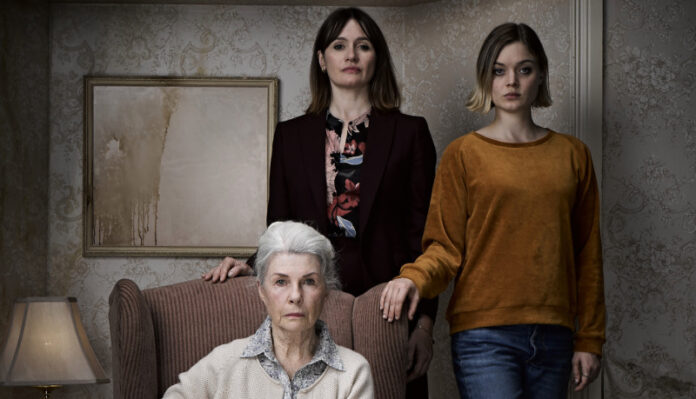 What’s our greatest fear about growing old? It’s not dying; that’s the easy part. It’s being alone and abandoned by those we love. In Natalie Erika James creepy, confident debut Relic, three generations of women struggle to deal with the reality of one’s descent into dementia, while facing the possibility they could turn out the same. The legacy of familial pain is a staple of the horror genre, but James’ ability to blend haunted house and body horror elements prove especially effective at creating an atmosphere that will chill you to the bone.

The Japanese-Australian filmmaker sets her film on the outskirts of Melbourne in a creaky, decrepit country home. It’s here that Relic unpeels its many layers, like crumbling drywall. Theatre actress Robyn Nevin plays octogenarian Edna, who has vanished from the home and not been seen in days. The police call her distressed daughter Kay (Emily Mortimer) and granddaughter Sam (Bella Heathcote), who drive up to take part in a search party. When they get to the home, what they find is a place that is untouched other than the Post-It notes acting as reminders to do little simple tasks, and others that suggest something strange is going on. But mostly, Kay and Sam don’t do much but shuffle around until suddenly out of nowhere Edna returns, and yet it isn’t a total cause for celebration.

What’s interesting about Relic is the connection it makes between Edna’s mental state and that of the house itself. She returns, covered in black bruises that look like rot, much like the corrosion that is infecting the walls. One moment, Edna can be completely herself, the next she’s violent, wild, and the house seems to shift to match her aggression. While Edna is completely unpredictable from one moment to the next, Kay’s concern for her mother is often supplanted by dark nightmares, possibly visions, that haunt her at all times of the day.

James shows incredible restraint in building the suspense slowly, lingering on her characters’ concerned, shadowy faces for a beat or two past the point of comfort. In her and cinematographer Charlie Sarroff’s hands, a home that was once a thing of joy becomes a thing of terror, even mundane tasks like making breakfast or having a bath take on an ominous tone. But the bleak, grim palette does become hard to take and you wish someone would just plug in a night light or something. Coupled with the slow pace, it can make for a much longer than the 89-minute runtime would suggest.

What makes Relic work are the changing relationships between Edna, Kay, and Sam. Kay’s worry over what to do about her mother only increase tension as the older woman rejects being treated like an invalid. There’s unspoken pain between them, but you see it in Kay’s eyes and in Edna during her brief bouts of lucidity. Meanwhile, Sam gets along with her grandmother much better, and is just happy to see her home and alive. Unlike Kay, she’s still too young to have those same fears about what getting older will be like. The resentment from looking at a parent and seeing an older, enfeebled, future of yourself is what’s truly scary. Relic is awash in dark tidings, but there are brief glimmers of hope and selfless acts of love. When all that we were has been taken from us, who will be left to take care of us? To remember who we once were? While Relic is too measured and its frights too oblique to have the same popular impact as the similar Hereditary, it shows James’ ability to use genre to confront uncomfortable truths.