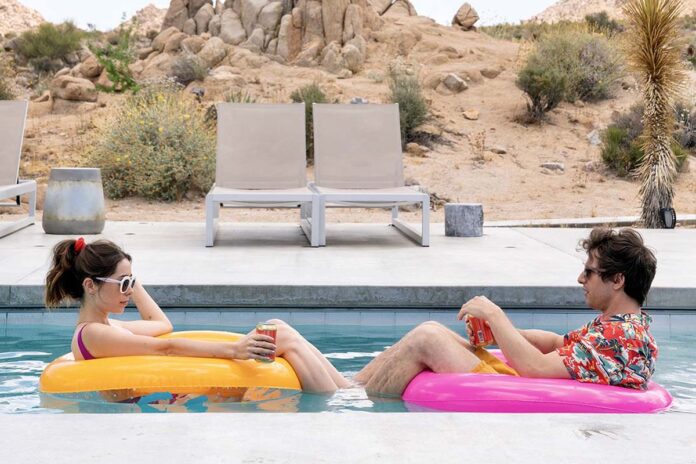 Think of the perfect summer movie. It’s got to be light and breezy, nothing too hard to get through. It’s definitely funny, maybe a little crude and witty. It would be even better if it was thought-provoking. Throw in some heart, some sun, and some charming personalities, and you would have a pretty enjoyable viewing experience. Well, Palm Springs is more than that. Produced by The Lonely Island of SNL fame and starring the troop’s own Andy Samberg, the Sundance darling not only reinvents the Groundhog Day scenario but brings a sweet, but never sappy, philosophical context to the genre.

Stuck at her half sister’s wedding, Sarah is already over the day’s festivities. Firmly against the idea of marriage, she flirts with a few people at the reception before consuming all of the alcohol around her and sitting by herself. That changes when she meets a handsome stranger with a killer wedding dance routine. They leave, make out in the desert before being attacked by a mysterious stranger. You know, how most weddings go. In the confusion, her date, Nyles, crawls into a nearby cave where she follows him back to the … past. She wakes up on her sister’s wedding once again… and again and again. Turns out they are stuck in a time loop. Leaning on Nyles to teach her the ropes of her new reality, they grow closer trying to navigate the same day over and over again, hopefully learning something about their own past, presents, and futures in the process.

This film would not have worked if the script wasn’t as tight as it is. Written by Andy Siara and directed by Max Barbakow, each joke lands exactly to the desired effect. The writing feels clean, every word needed, every plot point thought over. This is the kind of film that lives or dies by the script and luckily this one is going to live a nice long life on a farm somewhere. I can see this film being debated in film classes, it’s philosophy and meaning way deeper than expected. Barbakow’s vision complements every intention that Siara’s script, the actors, and the genre has in mind, making sure a thought-provoking and well-intentioned comedy emerges. His direction is smart, using the beautiful California vistas to his advantage and really creating a world you want to live in. Combined with stellar performances, you understand why it broke the record for highest-selling Sundance film at $17.5 million and 69 cents.

Andy Samberg plays the jaded Nyles, so stuck in this time loop that you question how long he’s been living in it. Samberg plays a version of himself, but it completely works within the time loop genre. Since leaving SNL, he has never really strayed from his vulnerable side, redefining what a leading man is with as much un-toxic masculinity as possible. He dives head-on into this persona in Palm Springs. If you are in a time loop, of course the confines of gender, age, and size don’t really matter when looking for a sexual partner. Of course, giving money to one of those candy-selling scams isn’t going to matter. If you are in a time loop, every social convention ever invented doesn’t matter because nothing really would. This role couldn’t be played by Jake Gyllenhaal or Ryan Reynolds, because the zaniness and sweet nature of the character would seem insincere on anyone else. Forget Doc Brown or Pickle Rick. You’ll want to be stuck in time with Andy Samberg.

Cristin Milioti gives a powerhouse performance of her own, walking the line between accepting her new situation and being taken prisoner by it. She easily keeps up Samberg comedically, while still giving the film a more serious backbone. JK Simmons also gives a hilariously riveting performance as Roy, a fellow wedding guest stuck in the time loop. Though the academy award winner is in a supporting role here, each moment he gets he adds the Simmon’s charm he is known for.

As many of us have been stuck in quarantine over the past three months, reliving the same boring day over and over, Palm Springs couldn’t come at a better time. With the charm and wit of its leads, to the smart script and direction, to its fresh take on a worn-out genre, it might be the movie need right now. One that sneaks up on you and reminds you of what matters most.

Palm Springs is available for streaming on Hulu this Friday. Watch the trailer below.