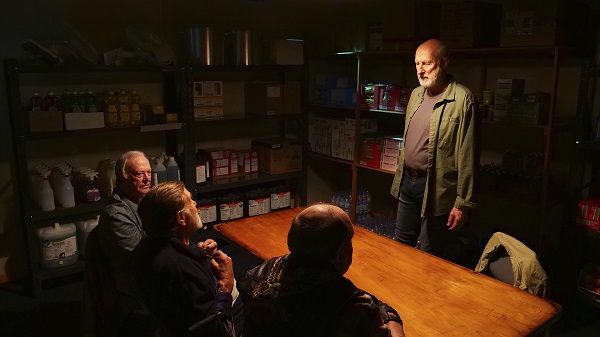 It seems that in this 2020 summer (usually) blockbuster season, we’re revisiting Vietnam all of a sudden. Last month, we got 5 friends to return to Vietnam in search of gold and revisiting the pain of that war (and explored the prism of race during that time) in Da 5 Bloods. Even though Spike Lee out-Spiked himself in that film, it was really about the relationships between men bonded by a brotherhood forged through war. While Never Too Late doesn’t touch the horror of Vietnam, it’s still about relationships forged from the war in a charming comedy about some vets down under and their need to escape their nursing home. 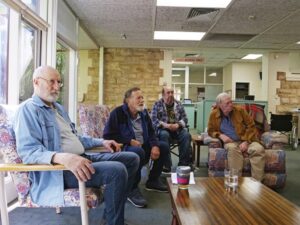 In Vietnam, Jack Bronson (James Cromwell) was a member of the “Chain Breakers,” a group of Vietnam POWs who escaped their prison during the war, finds himself in another “prison.” This time it’s The Hogan Hills Retirement Home for Returned Servicemen and Women down under. How and American GI ends up in an Australian Nursing home you ask? He actually wanted to “break-in” in order to finally locate his long-lost love Norma (Jacki Weaver), who he’s waited fifty years to try and pop the question to. Unfortunately for him, the day he gets to the nursing home is the day that she’s transferred out for an experimental Alzheimer’s treatment. Now he’s stuck in the nursing home and cannot leave. Lucky for him, all the other members of the Chain Breakers just happen to be in the nursing home with him. 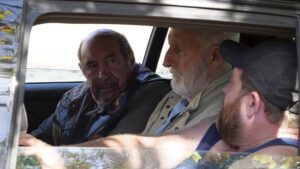 Part of the Chain Breakers includes Jeremiah Caine (Dennis Waterman), Angus Wilson (Jack Thompson), and James Wendell (Roy Billing), who seem to be content with living out their retirement years under the care of the staff at Hogan Hills. Jack, of course, doesn’t want to remain in the retirement home and wants to get Norma as she may not remember him by the time she comes back to Hogan Hills. After all, they are the Chain Breakers, they should be able to get out of a measly retirement community. After all, it’s not the Hanoi Hilton! But of course, they are no longer special forces members anymore. While Jeremiah seems pretty there, Angus is also starting to have memory issues and James is wheelchair-bound. Trying to plot a great escape is no longer as easy as they thought. To top it off, there’s some lying and deceit amongst the through as the reason for their escape. 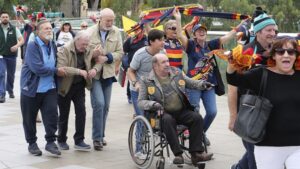 The Chain Breakers enlist the help of Elliot (Zachary Wan), a young student who’s the son of a nurse and a genuine Chain Breaker fanboy. No matter what they do however, it just doesn’t seem to work. They can’t outsmart the staff at the Hogan Hills and we get a few comedic moments of their trials and errors. Soon enough, they do the simplest thing and find a way to make their great escape. Towards the end, it turns into a cross of Ocean’s Eleven, Grumpy Old Men, and Ferris Bueller’s Day Off as the Chain Breakers get to enjoy some newfound freedom. Each has a reason to say “it’s never too late.” Jack has to get with Norma, Jeremiah wants to sail a boat as a bucket list item, Angus wants his football (Rugby for us in the states) medal currently on display, and Wendell wants to reunite with his estranged son who he hasn’t seen after spending most of his post-Vietnam life in prison (for being a bank robber) and in Hogan Hills. 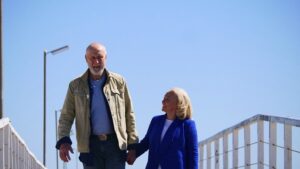 While Never Too Late is a dramedy, the drama is where it works best. The comedy bits have their moments but usually at the expense of the Chain Breakers just being old. Jack not knowing what Yelp is but wants to leave Hogan Hills a bad review, a weird gay gag, and a few other moments end up falling flat. Of course, how do American and British vets end up at an Australian retirement home for the military is never answered? Shouldn’t the VA or the Veterans UK offer these services for their soldiers? However, The film is also elevated by the cast, especially Cromwell and Weaver, who is deliciously charming as they flirt with each other. The dramatic moments in Never Too Late also are great. When the Chain Breakers revisit their unbreakable bond as they continuously say their group motto of “no excuses, no regrets” to remind them that they can achieve everything, even escaping a retirement home.

Review: ‘The Grudge’, Horror Reboot Is As Bland And Unimaginative As Its Title