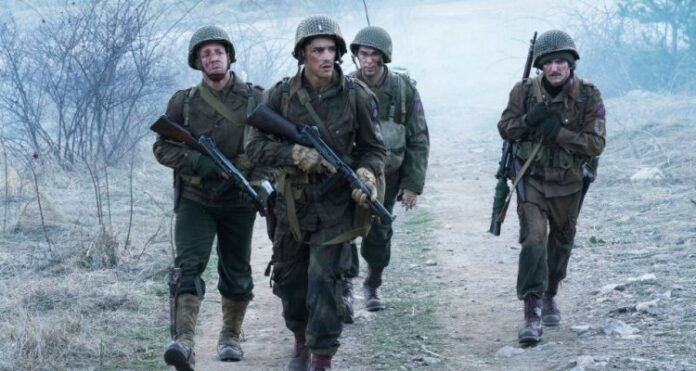 Five American soldiers get shown that the horrors of WWII extend beyond the battlefield in Ghosts of War. Chris (Brenton Thwaites) and his platoon have been given orders to relieve other soldiers guarding a French Chateau. Chris’s team is made up of Tappert (Kyle Gallner), Eugene (Skylar Astin), Butchie (Alan Ritchson), and Kirk (Theo Rossi). Tappert is a troubled sniper with some darkness in his past. Eugene is pretty much the brains of the group while Butchie is the brawn. Kirk is quick to entertain with a story, even though everyone knows they are bullshit. Not everyone is best friends, but they have each other’s back. 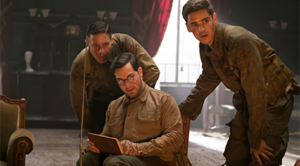 Even as they march across enemy territory things begin to seem off to Chris. Images in shadows, bad dreams, an eerie sense of dread – possibly attributed to the stress of war…but maybe not. Upon laying eyes on the chateau, the men are ecstatic. Finally, a central place with a roof over their heads, beds to sleep in, and food. With these comforts, it does seem curious that the soldiers currently guarding the Chateau are so eager to leave. The team is quick to learn why as almost instantly the spirits within the house began tormenting them. At first smaller things – something falls over, lights go out suddenly, distant noises that may or may not be screams. Then the intensity is ratcheted up, and the soldiers realize they are in more trouble than they thought. 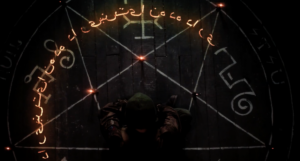 Ghosts of War is full of issues. The first being that the film has slim to no character development whatsoever. It’s so scarce that some of the soldier’s names aren’t even uttered until well into the flick. We know nothing about these people except brief stories from the past and a mention or two of family. This in turn makes it difficult to truly care or form bonds to any of the major players in the film. Horror movies are notorious for boneheaded decisions. This trend continues in full force as a questionable decision after questionable decision keeps getting made. Ghosts of War never truly commits to being a war film or supernatural film and ends up subpar at both.

The scares throughout Ghost of War are mostly cheap jump scares. Someone looks away, looks back, loud noise, and ghost – BOO! I will say that there are a couple of clever shots writer and director Eric Bress inserts into the film. While I did appreciate these brief moments, they are few and far between. In a nutshell, Ghosts of War is comprised of uninspiring characters trudging around a giant house. Then they see a ghost and somehow, we’re at the next scene with only that encounter getting a mention a fraction of the time. To his credit, Bress does try and mix things up, but any twist ultimately falls flat. Ghosts of War is full of typical horror clichés and does not bring anything remotely new to the table. There are far better options than Ghosts of War, and I think you won’t regret passing on this one.