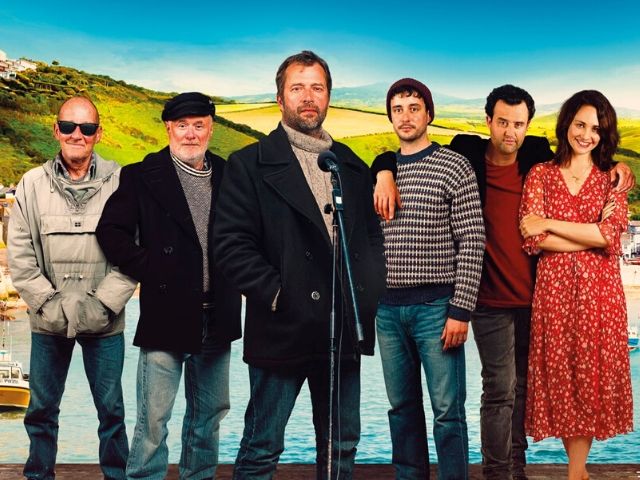 A fast-living, cynical London music executive (Danny Mays) heads to a remote Cornish village on a stag weekend where he’s pranked by his boss (Noel Clarke) into trying to sign a group of shanty singing fishermen (led by James Purefoy). He becomes the ultimate ‘fish out of water’ as he struggles to gain the respect or enthusiasm of the unlikely boy band and their families (including Tuppence Middleton) who value friendship and community over fame and fortune. As he’s drawn deeper into the traditional way of life he’s forced to re-evaluate his own integrity and ultimately question what success really means.

Right from the opening sequence of Chris Foggin’s Fisherman’s Friends, you get an immense sense of happiness and joy that rushes through your body. It opens with a lovely tune that is sure to put a smile on just about any viewer’s face and has more songs along the way that are simply irresistible. It’s not a film that only offers songs though. Far from it. It’s a film that offers a ton of heart through its likable and charming characters, and its story, which, although familiar, is definitely a feel-good one. In times like these, we could definitely use movies like this.

Some aspects of this film reminded me of John Carney’s Sing Street, which is one of my favorite films ever made. I like Sing Street much more, but Fisherman’s Friends is similar in that its storyline is fueled by music and is full of heart and humor. Some of the jokes here didn’t land, but a lot of them did which was a delight to see. The screenplay on display is wonderfully sweet and takes you on the journey of this boy band that is hard to resist. Each character feels fairly well fleshed out and we get a sense of who they are –  friendly, loving people.

Does the movie play out in familiar and traditional ways? Yes, absolutely. When it comes to big surprises in Fisherman’s Friends, there is next to nothing, but that isn’t always a bad thing. Of course, had this film found a way to be extremely innovative and fresh, it would have been even better, but sometimes riding the line of familiarity is the safest bet as long as you are able to tell a story with beats that are satisfying and entertaining. Luckily, this movie does that.

But let’s take a moment to talk about all of the actors involved because they do a terrific job at bringing these characters to life. Daniel Mays and James Purefoy in particular steal the show here as Danny and Jim respectively. Danny is a cynical music executive that attempts to gain the respect of a Cornwall boy band, and along the way, has to deal with their way of living. They aren’t in the business for the money, but rather the memories and friendships that are made along their journey. Sometimes, this can be a little bit messy and predictable even, but certain plot points did bring a smile to my face and it is sure to do the same for many others.

Something that deserves lots of recognition here is the cinematography by Simon Tindall. Here, Tindall manages to perfectly bring to life the lovely scenery of Cornwall and whisk you away with all of its glory. From the lush landscapes to the lakes and rivers, Fisherman’s Friends is a beautiful movie to look at, and just a beautiful movie in general, even if it feels a bit too safe and messy sometimes.