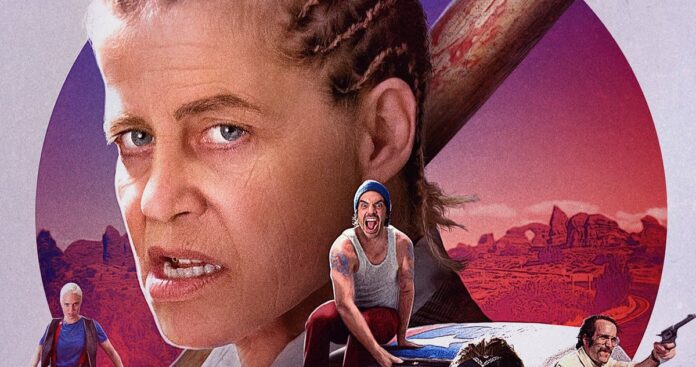 Nobody is going on any road trips across the American South right now but that doesn’t mean you can’t take one from home. In the new film Easy Does It, director and co-writer Will Addison takes us on an unconventional road trip if you will, full of crime, war paint, radio commentators, and Linda Hamilton in cornrows. Based on Will Addison’s 2013 short film, writer Addison takes this opportunity to expand on that story, but often finds himself in the pitfalls of a first-feature director.

When his mother dies and tells him where to find some buried treasure, Jack (Ben Matheny) and his numbskull best friend Scottie (Matthew Martinez) decide they have to skip out on their debts and run to go find it. The problem is they don’t have any money and their boss King George (Linda Hamilton) is hell-bent on getting their money back. After they rob a convenience store and take pushover Collin (Cory Dumesnil) as a hostage, the three men head across the south, robbing gas stations and diners, running from George’s henchwoman, and avoiding the police, all in pursuit of their American dream.

However, Martinez and Matheny, who also served as co-writer, come off less as loveable rascals and more as annoying, imposing pricks. It’s really hard to root for anyone in this movie, but when you have two idiots that keep making the same mistakes over and over again, it’s not only tedious to watch, but you keep hoping their next misadventure will be their last. A character has to have some endearing quality to make the audience suffer fools gladly and unfortunately, Jack and Scotty just don’t have it.

Linda Hamilton milks everything she can out of her character King George and gives a well-crafted performance. However, as the androgynous, ruthless owner of an entire town, her story seems more interesting than any of the other characters, but her character’s origin is never really explained. Any explanation for those cornrows would also be appreciated. A butch crew cut would have been just as effective and not as culturally appropriative. This alludes to a larger trend within Easy Does It where elements exist purely for aesthetic value without a connection to a larger narrative purpose.

Besides Hamilton, it’s two other credited leads aren’t really leads. This isn’t uncommon with a low budget independent film but we are talking maybe 10 minutes of screen time combined for Bryan Batt and Dwight Henry. Batt, best known for his role on Mad Men nearly steals the whole movie as the determined and fame-hungry police officer set on apprehending Scottie and Jack. Dwight Henry (Beasts of the Southern Wild) isn’t given much to do as a small Texas police chief but does his best with what he has.

While the pieces don’t always fit together, some of the people involved are quite impressive. Besides Terminator legend Linda Hamilton, John Goodman and Harry Shearer of Spinal Tap and Simpsons fame lend their voices as two radio announcers. The Black Keys’ drummer Patrick Carney wrote original music for the project. Speaking of, the  music is one of the best parts of the film, incorporating folk, rock, and even Funkedelic’s “Can You Get To That?” The soundtrack lifts the sophistication of the film, especially when Addison pairs a montage or slow motion shot with just the right song.

Easy Does It floats between indie Southern crime comedy and film school thesis film. It doesn’t always go down easy but some of its layered elements make it an enjoyable ride for the most part.

Now available on on-demand. Watch the trailer below.