Thanks to social media pretty much data mining everything about us that we freely give, the idea of a “digital afterlife” (either your consciousness is uploaded into the cloud, or an AI-based on “you” can be also uploaded) seems more and more a reality every day. Show’s like Amazon’s Upload and Black Mirror’s “Be Right Back” has managed to convincingly give us a world were the essence of you gets to live on forever. While Upload went the satirical/comedy route, Black Mirror (as usual), took a dark turn. Concept artist turned writer/director Gavin Rothery’s feature debut film Archive explores the idea of trying to bring a digital afterlife into the real world with interesting results. 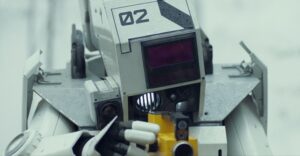 In 2038 George (Theo James, of Divergent fame) is a computer programmer who is working in isolation working at a facility in Japan dedicated to advancing artificial intelligence. So far, he’s had a little bit of luck in his work. Two robots he’s created J1 and J2 live and work with him. Of course, with them being prototypes in his work, they aren’t as advanced as he would like. J1 has the mind of a small child, and J2 has the mentality of a teenager, complete with the emotional outbursts. He finally feels like he’s hit his stride with humanoid looking J3 (Stacey Martin), who bared an uncanny resemblance of his wife who perished during a car accident via flashbacks. While George wants to create a robotic individual for his corporate overseer Simone (Rhona Mitra), he really wants to find a way to bring his dead wife back to life.

This leads to another corporation called Archive (hence the film’s title). Archive specializes in recreating a dead loved one into an analog telephone database, to allow a grieving loved one to get the chance to continue communication with the deceased (pretty much the same plot at the Black Mirror episode “Be Right Back,” all the way to the dead loved one perishing in a car accident) for a limited amount of time. George has enlisted Archive to not only talk with his dead wife, but he also wants to reverse engineer their technology to convert his dead wife’s analog signal into a digital one, and then bring her into the real world to an android body he’s creating. 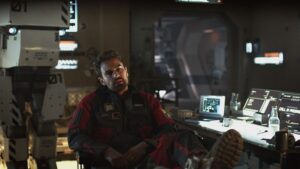 The first half of the film is almost a case study in isolation. George spends his time along, except for J1 and J2. If it’s eerily similar to Duncan Jones’s underrated sci-fi flick Moon, that’s no accident as first time director Gavin Rothery worked as a concept artist for that film. So in a sense, he’s borrowing from his own work. Even the designs for J1 and J2 look like the robots from Moon. George programmed J1 and J2 from some of the reverse-engineered memories of his dead wife, but they “really” aren’t her since they don’t have the mental capacity of a human being. But don’t tell J2 because she genuinely loves George, even though he treats her as a “thing.” When he finally develops J3, the movie takes a change and he finally believes he has built a robot with the capacity to bring his dead wife back. Of course, this doesn’t sit well with the Archive corporation as they realize some of their software is getting messed with (which is something the corporation absolutely doesn’t want people to do), so they send an executive (Toby Jones who never disappoints) and his robot bodyguards to George’s location to retrieve their software by force. The creation of J3 also makes J2 jealous as she feels she’s about to be replaced by a better model.

The final act of Archive kicks the film into gear as not only does George figure out how to finally fix his problem with his dead wife, but he also has to race against the clock to avoid both the Archive corporation as well as his own company, which now may be held responsible for corporate espionage against the Archive corporation. The final 15 minutes of the film really works well, especially with a twist or two that would make M Night Shyamalan proud. The cinematography of the film is the star as the set design as well as the snowy picturesque scenes in Japan outdoors are breathtakingly beautiful. I gotta admit, I’ve never seen the Divergent movies, so I’m not familiar with a lot of Theo James’ body of work, but in Archive, he delivers some pretty good dramatic acting as his co-stars are pretty much actual robots (which probably cost the studio some coin to convincingly make) and he delivers a fine performance against them. Speaking of robots, the set design is also very good. While J3 is a bit of a cheat production-wise as actress Stacy Martin plays the robot under heavy prosthetics/CGI, J2 gives the best performance as a jealous robot who doesn’t want to be replaced and you immediately connect with her. As stated, the ending is what makes the film really tick. It folder 2 stories (the interpersonal relationships between George and the robots, and the corporate raiding George was doing against 2 companies to bring his wife back from the dead) and then zigs at the right time to give a very unique conclusion.