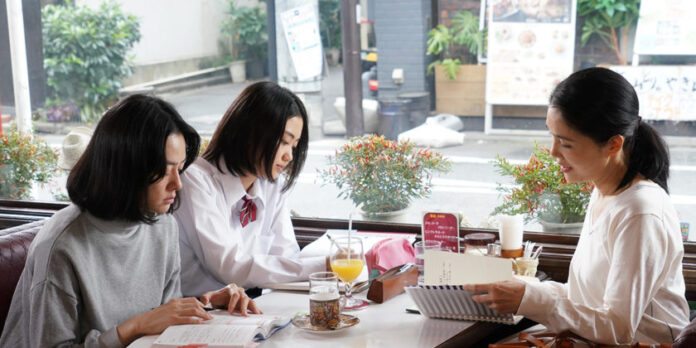 A Girl Missing tells the tale of a family dealing with the horrors and fallout from a kidnapping. Ichiko (Mariko Tsutsui) works as a home-care nurse for the Oishi family. Ichiko is tasked with taking care of Toko (Hisako Okata) – an elderly woman struggling with dementia. Toko’s paintings and art have made her somewhat of a local celebrity. Ichiko also spends time helping raise the Oishi sister’s – Saki (Miyu Ozawa) and Motoko (Mikako Ichikawa). Ichiko spends time with the girls, helping with homework and other aspects of their lives. The girls care for her and Ichiko cares for them. Despite the stable work, Ichiko struggles financially, but she doesn’t let that affect her performance.

One fateful day, that seemed just like the others, Ichiko is out with the girls before school. Saki leaves to go to class and doesn’t return. The family is scrambling to find Saki and have to suffer for over a week before finally receiving good news. Saki has been found and a suspect has been arrested. To Ichiko’s horror, the suspect is Tatsuo Suzuki (Ren Sudo), her nephew. Ichiko struggles with the morale dilemma of telling the Oishi family about her connection to the kidnapper and the fear of the repercussions from her nephew’s actions on her life. 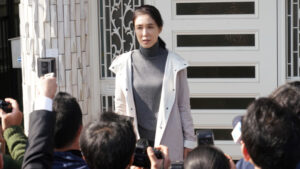 A Girl Missing has been described numerous times as a “slow burn thriller.” There are instances where films take time to build up suspense. Slowly ramping it up as the film progresses until reaching a boiling point and great ending. A Girl Missing is not one of those films. It trudges along not coming close to reaching “thriller” status but has plenty of “slow burn.” The film is incredibly boring. Writer/director Kôji Fukada and writer Kazumasa Yonemitsu simply don’t deliver. There is not a lack of action, intrigue, or really anything noteworthy to make A Girl Missing worth a watch.

Fukada tries mixing in a few subtle touches – mainly through unique camera angles. While they did show some appreciated creativity, it was not nearly enough. A Girl Missing features little to no character development. We are watching a tense situation, that is resolved far too quickly, and the fallout from it. While the situation should be evoking emotion, the lack of any connection to the characters makes it fall flat. The audience simply watches multiple players, who are acting incredibly strange, going about their lives. Many of the major characters behave without rhyme or reason. With no true backstory or development, the audience just needs to accept why they are the way they are. All-in-all A Girl Missing is a boring and forgetful drama. Do yourself a favor and make sure A Girl Missing is missing from your summer movie queue.