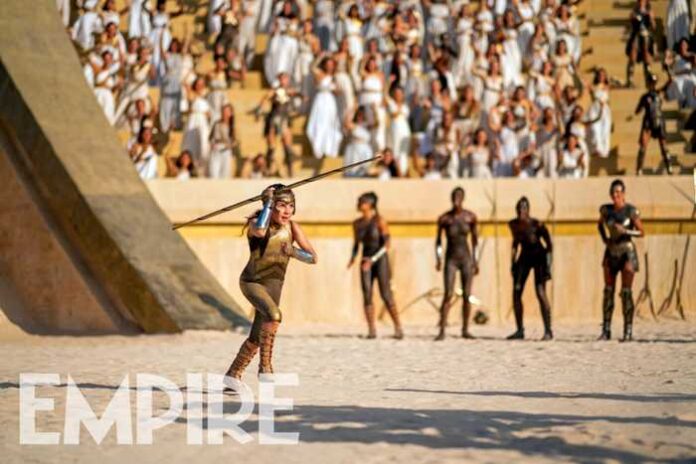 While Wonder Woman 1984 will send Diana (Gal Gadot) rocketing into the ’80s, there will be time to flashback to her past on the Amazonian island of Themyscira, as well. A new image was released by Empire that shows Diana hurling a spear in what director Patty Jenkins refers to as the Amazon Olympics. She also discusses the Amazon spinoff movie, story ideas for a sequel, and a possible animated series.

“What I love about the Amazon Olympics is everything that we got to really celebrate in the first movie… ,” Jenkins said. “Here are these people who are incredibly powerful and capable, but different in how they approach things. If you’ve been training for hundreds of years because of an impending invasion, you’re going to be constantly working on all these skill sets. So, to me, every year, they would have these Olympics to see who’s doing the best on horses or swimming the fastest, and seeing new tricks people have figured out.”

We know that Robin Wright and Connie Nielsen are back for the sequel, reprising their roles as Antiope and Queen Hippolyta. Perhaps we’ll see them racing hurdles or something.

While it’s unclear if current-day Diana will ever return to her homeland, the Jenkins is far from done with the Amazons’ story. A spinoff movie has been talked about already that would be “part of the in-world story of Wonder Woman”.  There is also talk of an animated series centering on the Amazons, although no details are immediately available.

Jenkins has recently expressed some doubt whether she would direct a third Wonder Woman movie, but that hasn’t stopped her from coming up with story ideas alongside Gadot…

“You’re enjoying the movie you’re making and also reflecting on what could be different or better in the [real] world,” Jenkins said. “And therefore what story you want to tell… That’s the greatest thing to me about superhero stories. You’re able to have a dialogue about what a hero would be right now. So yes, I have ideas for what I’d like to say, and Gal does too.”