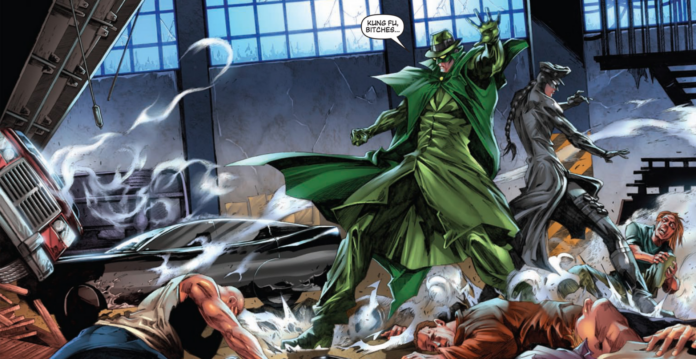 Kevin Smith loves his heroes in green. Smith, who famously wrote a stretch on the Green Arrow comic years ago, has also been involved with another emerald crime-fighter: the Green Hornet. Years ago, he was to write a live-action film featuring the iconic character, but when it fell through he turned that story into a comic book.

Now, Smith finds himself back on the Green Hornet beat, as he’s developing an animated series with the folks at WildBrain, owner of the Peanuts franchise. This version of the Green Hornet won’t center on the classic character, Britt Reid, but will be a contemporary story focused on the grown son of the original Green Hornet and the daughter of the original Kato. Together, they’ll fight crime in a modern Century Century, racing through town in their high-tech car, Black Beauty.

The project is geared towards a family-friendly audience, which is something that is a little bit different for Smith.

“It’s an honor to escort the legendary Green Hornet and Kato into their very own animated series for the first time in the rich history of these iconic pop culture characters,” Smith said in a statement. “We’ll be telling a tale of two Hornets – past and future – that spans generations and draws inspiration from a lifetime spent watching classic cartoons and amazing animation like ‘Batman: The Animated Series,’ ‘Heavy Metal,’ and ‘Super Friends.’ I can’t believe WildBrain gave me this job and I can’t thank them enough for the opportunity to extend my childhood a little longer.”

The Green Hornet was created in the 1930s and crossed over into radio, comic books, movies, and the 1960s TV series made popular by Bruce Lee as Kato. Seth Rogen teamed with director Michel Gondry on a reboot in 2011 that was critically-panned but made $227M worldwide. Most recently it was reported that Universal is developing another Green Hornet live-action film that would be in the classic mold, but that is still very early on.

Smith’s animated The Green Hornet is currently being shopped to networks and streaming services. [Deadline]