Ever since Disney acquired 20th Century Fox’s collection of Marvel characters, fans have been wondering when and how they would introduce the X-Men into the MCU. There’s no simple way to do it. The X-Men are such a popular group they sustained their own movie franchise for two decades, and fans have a lot of actors that they still like in those roles. But one actress who really hopes to play the X-Men leader Storm is Janelle Monae, and she’s making it known that it needs to happen.

Monae is another bestselling, world-class singer who has made the successful jump to acting. She’s starred in films such as Hidden Figures, Moonlight, and Harriet, but what she really wants is to play Ororo “Storm” Munroe, the weather-controlling mutant and co-leader of the X-Men. Speaking with Empire, Monae says she’s even talked with Black Panther director Ryan Coogler about helping her to make that a reality…

“One of my dreams has always been to play Storm. I don’t know if she comes in Black Panther, but it would be a dream to have her in it. I don’t know where they are with that. A lot of women have played Storm and they’ve done an exceptional job, and I would love to be in that line of artists and get to do Storm justice.” 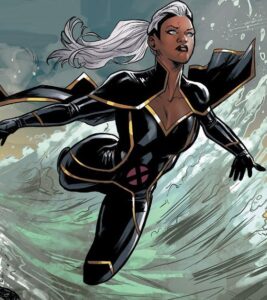 Monae revealed that while she was recording her Dirty Computer album, Black Panther stars Lupita Nyong’o, Chadwick Boseman, and Michael B. Jordan would visit her in the studio. That was her chance to begin some conversations about playing Storm.

When asked if she had talked with Coogler about it, Monae said “I definitely have thrown it out there.”

Introducing Storm in a Black Panther sequel might be the easiest route to introducing Marvel’s merry mutants. Storm is revered as a goddess by the African people because of her weather-manipulating abilities. She and T’Challa (played by Chadwick Boseman in the movies) are old friends, and for a short time they were even married. I could see Coogler adding Storm into the mix, causing some romantic tension between T’Challa and Nakia (Nyong’o).

As much as I love Halle Berry as Storm, that time is over. Sadly, it’s also over for Alexandra Shipp, who only got a couple of shots at the role and has expressed a little interest in returning.

Next up for Monae is thriller Antebellum which opens August 21st.