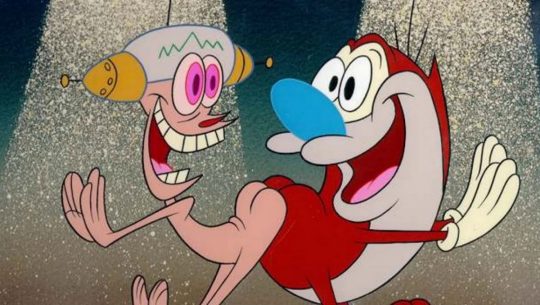 The modern era of adult-oriented animation couldn’t have happened without Ren and Stimpy. Created by John Kricfalusi, the series was bizarre and subversive and helped Nickelodeon breakout of its kid-friendly image. But as the show’s popularity soared, it also became the center of controversy due to Kricfalusi’s odd behavior. The rise and fall of the cult favorite cartoon is captured in the Sundance doc, Happy Happy Joy Joy: The Ren & Stimpy Story.

Directed by documentary filmmakers Ron Cicero & Kimo Easterwood, the film looks at the impact Ren and Stimpy had when it debuted in 1991, ushering in a new era of mature artist-driven animated content. Kricfalusi, a longtime animation vet (he directed the Mighty Mouse movie in 1982), looked at as a rock star of the industry, but his odd behavior and conflicts with Nickelodeon execs over the show’s often disturbing content led to his being fired after only a year. Kricfalusi was later accused of sexual abuse, and many consider the show’s legacy to be tarnished.

SYNOPSIS: In the early 1990s, the animated show Ren & Stimpy broke ratings records and was a touchstone for a generation of fans and artists. Creator John Kricfalusi was celebrated as a visionary, but even though his personality suffused the show, dozens of artists and network executives were just as responsible for the show’s meteoric rise. As Kricfalusi’s worst impulses were let loose at the workplace and new allegations about even more disturbing behavior have surfaced, his reputation now threatens to taint the show forever.

‘Ren And Stimpy’ Is Being Revived At Comedy Central