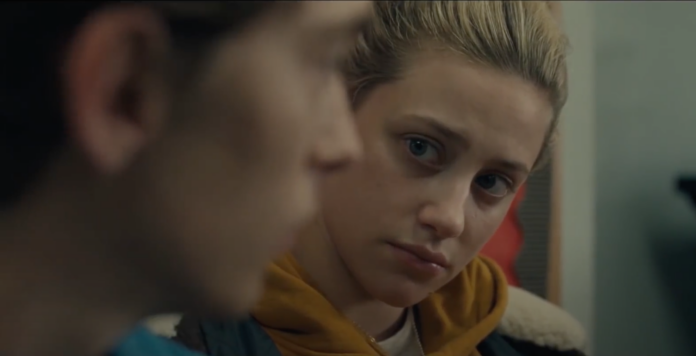 Austin Abrams and Lili Reinhart have just been sent to the principal’s office in a new first look for Amazon Prime’s Chemical Hearts. In the clip, Abrams walks into the school’s office and shares an intense stare with Reinhart, before being called into an administrator’s office, Lili leading the way on crutches. The film is an adaptation of Krystal Sutherland’s 2016 young adult novel Our Chemical Hearts. A trailer has also been released which expands on the coming-of-age story.

The film’s official synopsis is as follows:

Seventeen-year-old Henry Page (Austin Abrams) has never been in love. He fancies himself a romantic, but the kind of once-in-a-lifetime love he’s been hoping for just hasn’t happened yet. Then, on the first day of senior year, he meets transfer student Grace Town (Lili Reinhart) and it seems all that is about to change. When Grace and Henry are chosen to co-edit the school paper, he is immediately drawn to the mysterious newcomer. As he learns the heartbreaking secret that has changed her life, he finds himself falling in love with her — or at least the person he thinks she is.

Reinhart is best known for her role as Betty Cooper in the CW’s teen drama Riverdale. Last year she also starred in Hustlers as one of Jennifer Lopez’s accomplices. Abrams is no stranger to the teen drama genre having supporting roles in Paper Towns, Euphoria, and Dude. He has been on the rise for a while, playing roles in Scary Stories To Tell In The Dark, The Americans, This is Us, Silicon Valley and Brad’s Status. Together they appeared in 2013’s coming of age film and Sundance darling The Kings of Summer.

I’m curious to see how this stacks up compared to many of the other teen romances that seem to be coming out soon including Words on Bathroom Walls and Endless. I didn’t watch Riverdale past the first season but enjoyed Hustlers a great deal. This time last year I was devouring HBO’s Euphoria and was obsessed with Abram’s storyline with the sexy and plus-sized Kat. We will see how their chemistry and relationship fares on Amazon Prime August 21st.

Check out the clip below.