Given Romola Garai’s history of starring in period pieces such as Dirty Dancing: Havana Night, Vanity Fair, and Atonement, launching her directorial career with a gothic horror isn’t what anybody would expect. With Amulet, Garai makes an impressive case for herself as a filmmaker to watch. The film, which I had heard the buzz over since it premiered at Sundance, is part haunted house story, part revenge tale, part exploration of trauma and the horrors of war. That may sound like a lot, but Garai brings those elements together like a seasoned veteran.

Amulet stars Sundance favorite Carla Juri (Wetlands, Blade Runner 2049), Alec Secăreanu (God’s Own Country), and Imelda Staunton. The story, which Garai also wrote herself, follows Tomaz, a troubled ex-soldier who agrees to help an isolated woman care for her ailing mother. While the arrangement seems ideal for everyone, there are deadly secrets scratching to be set free, old traumas that simply refuse to die. 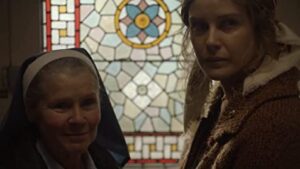 I was fortunate to spend some time talking with Romola Garai about the making of Amulet. We talked about her motivation in wanting to tell this story for her directing debut. We also discussed the sudden surge of female directors in the horror space, crafting the movie’s unique look, and more.

Amulet opens tomorrow, July 24th! You can check out my review here, and watch the interview with Garai below!