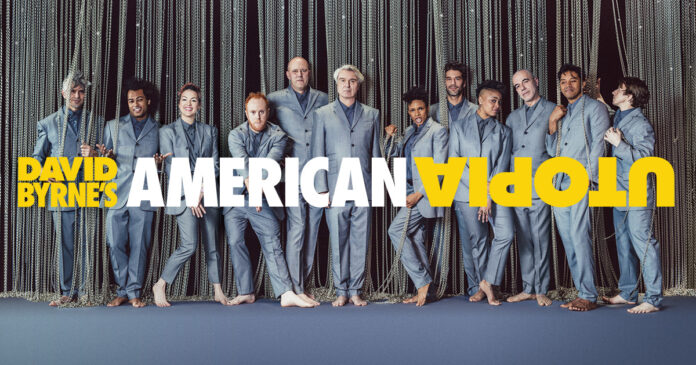 *UPDATE* Following on the heels of Spike Lee’s Da 5 Bloods, we won’t have to wait long before his next project smacks us in the face.  HBO has announced they’ll release Spike Lee’s collaboration with David Byrne, an adaptation of the musician’s Broadway show American Utopia. While there’s no firm release date, it’s expected to be later this year. Original story is below.*

Talking Heads frontman David Byrne has already had the chance to work with one directing legend, Jonathan Demme, on the iconic  concert film Stop Making Sense. Now many decades later he’s teaming up with a director who has often been compared to Demme, the great Spike Lee, on a film version of his 2019 Broadway production of David Byrne’s American Utopia.

American Utopia is based on Byrne’s 7th solo studio album and is a walkthrough his legendary career, incorporating several Talking Heads hits into the soundtrack. So think of it as a combination stageplay and a rock concert movie, which should be interesting to see in the hands of Lee. This won’t be his first time tackling such material. He filmed the 2008 Broadway production of musical Passing Strange and debuted it at Sundance the following year.

“Pinch me. This couldn’t have worked out better for this project. Spike Lee directing and Participant producing — two socially engaged teams, well, three if you count us in the band, coming together in what I feel will be something moving, important, and unlike anything anyone has seen before.”

It’s unclear when Lee and Byrne will get moving on this, but the director is currently in post on his upcoming film, Da 5 Bloods.