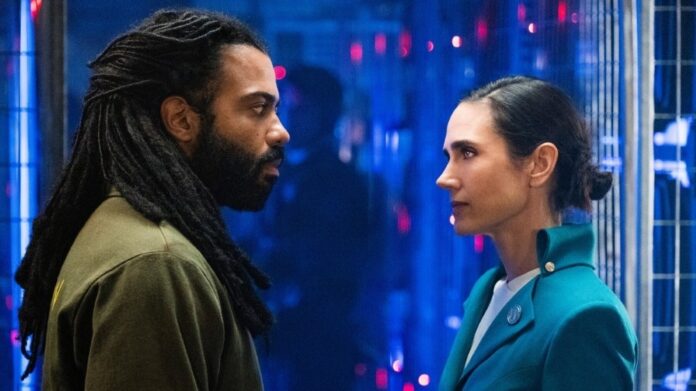 A few weeks ago I booked passage on the first episode of TNT’s long-troubled, oft-delayed Snowpiercer. Thinking it would be a disaster straight out of the station, it was still disappointing to find my early concerns justified. The adaptation of Oscar-winner Bong Joon-ho’s 2013 film about the last vestiges of humanity circling the world in a train, 1001 cars long, as we are reminded roughly 1002 times, couldn’t come at a better time. A world broken down by excess, greed, and class division forced to come together due to a catalyzing global event. But despite the show’s timeliness, a decision to saddle it with a belabored murder mystery threw it off the rails right from the beginning.

That mystery, which involved a serial killer slicing up third-class passengers from limb to genitals, hangs around like lost luggage in the passenger car for too long. But it serves as an easy introduction for those unfamiliar with Joon-ho’s sci-fi action flick; give them a crime procedural they can easily relate to because that’s what every other show on network TV is right now. Plus it serves as a way to introduce the broken down class systems within the massive vehicle. Daveed Diggs is Andre Layton, a former detective now one of the “tailies”, where the ragged poor live in squalor having forced themselves aboard at the start of the global climate disaster which froze the planet. Layton is thoughtful, rugged, humanist; he’s someone who wants it to be “one train” for all. Meanwhile, the rich live in relative comfort in first class. Second class has it slightly worse, while those in third mostly comprise the labor force and security forces.

Layton’s opposite is the mysterious Melanie Cavill, played by a beautiful and austere Jennifer Connelly. Melanie is the voice of the train and its secretive benefactor, Mr. Wilford. She runs “Hospitality”, which is some Orwellian bullshit because they can be anything but hospitable. In an early sequence, a bloody riot breaks out caused by the tailies, and payback is an icy cold bitch; an arm shoved outside the train until it’s an icicle, then smashed into pieces. It’s a brutal tactic that will be repeated, with just as grisly an effect.

While Snowpiercer is based on Joon-ho’s film and the graphic novel which launched this post-apocalyptic tale, it’s not totally beholden to either. Taking place seven years after the “event” and about eight years before the movie, the series is its own beast, one that veers away from the anti-capitalism message of its predecessors for far too long, before eventually finding its footing once the rebellion actually starts. This fractured, uneven narrative probably has to do with the show’s embarrassing production. Josh Friedman (The Sarah Connor Chronicles) was original showrunner but left over creative differences, only to be replaced by Orphan Black‘s Graeme Manson. Doctor Strange filmmaker Scott Derrickson helmed the pilot but, too, left reshoots over the same reason. Not only that, but Snowpiercer found itself bouncing between TNT and TBS networks before finally pulling into the TNT station for good. That’s a lot to contend with.

So for about the first four episodes we are treated to what is a very bland, uninspired detective story that only vaguely resembles Snowpiercer.  Layton is dragged away from the tail, his adopted son Miles (Jalin Fletcher) and lover Josie (Katie McGuinness), to investigate the murders uptrain. From there he gets a taste of what the rest of the passengers really lives like. The rich are uniformly grotesque in their snobbishness, and dismissive of the rest of the train’s needs. They dine on the last delicacies left in the entire world while the tail choke down on blocks of refuse mixed with insects for protein. Some of the finest moments, that always gave me a smile, is when someone from the tail gets to eat something they haven’t had in years. Even a spoonful of oatmeal is like a taste of Heaven.

But this murder…it goes nowhere. The actors seem bored with it, and you can sense that someone finally decides it’s time to pull the plug because of the rushed, haphazard way in which it wraps up. And almost immediately it’s like someone flipped the switch to “Revolution”. This is also the moment when Snowpiercer begins to realize what it should’ve always been. There’s plenty of political subtext to be found here, but what made Joon-ho’s movie so good is that it didn’t waste time getting bogged down in the details. It simply couldn’t afford to. This latest serialized version has more time to spare, and so we see a lot of wrangling together of various forces, occasional betrayals, and at least one shocking death of a key character. Layton emerges as a defiant, complex (his issues with women run DEEP!), conquering hero worth following into future seasons. Meanwhile, Melanie is just as complicated with loads of secrets waiting to be unearthed. These pieces work to build the momentum for the coming battle, which is really what Snowpiercer is all about. Life under crony capitalism is war, and it’s ugly and it’s violent and a lot of people are going to die if it’s ever going to change. Snowpiercer, capturing some of the grimy aesthetic and edginess of Battlestar Galactica, is best when it just gives us the fight head-on and throws the other stuff overboard.

NOTE: Thanks to Khalil Johnson for tagging in on the last couple of episodes while I was unavailable. That gave me time to watch the entire season and so decided it was best to wrap up the whole thing in one shot. Thanks again!