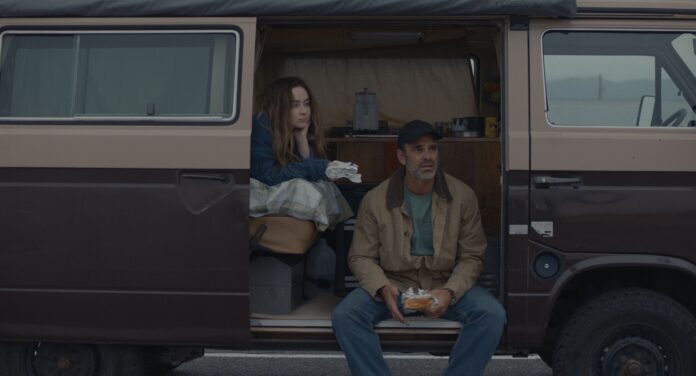 In the new film The Short History Of The Long Road, Sabrina Carpenter sheds her Disney persona for the open road. Writer/Director Ani Simon-Kennedy brings us a story of modern American nomads, Nola (Carpenter) and her dad Clint. Traveling around in an old van, being homeschooled with no cellphone, it’s the only life Nola has ever known, her mother leaving them when she was a baby. Though its clear its she’s starting to question her father’s methodology, she doesn’t get the chance to rebel. With his sudden passing, Nola is left to pick up the pieces and navigate a world without rules and her only companion.

After she’s left abandoned, Nola tries to figure out her next move. For a large majority of the film, we are watching Nola trying to survive, sleeping in abandoned houses, relying on the kindness of strangers, stealing gas. It’s clear her lifestyle has hindered her ability to connect with parental figures, forcing herself into womanhood when she clearly is still needing to be somebody’s child.

In films like Captain Fantastic and Leave No Trace, these dads are portrayed as obsessive fanatics scared of the outside world. The Walking Dead’s Steven Ogg’s gives a more subdued and realistic performance as Nola’s dad, Clint. You see his insecurities and failures as a parent, but you understand what Nola sees in him. He’s not a fantastic radical, he’s a free spirit who loves his daughter. Ogg builds his character around these layers, giving Carpenter something complicatedly beautiful to play off of.

Anchoring the entire film is Sabrina Carpenter’s performance. This is the first real leading role Carpenter has had outside of the Disney machine. Thankfully, she has the nuance and maturity to pull off the part. Carpenter has full control over the character’s emotions, flipping between desperate and vulnerable to guarded and skeptical at the drop of a hat.

When her van breaks down, she decides to plant some shallow roots in a small western town. There she meets Miguel, a mechanic who begrudgingly willing to fix her most prized possession in exchange for help around his shop.  This role is perfect for Danny Trejo. Until he pops up halfway through, the film is heading in a heavier and bleaker direction. Instead, Trejo brings a light and lively energy to Nola’s journey, being sweet yet tough. It’s an effective realistic performance proving what an asset Trejo can be in a film’s arsenal.

Simon-Kennedy’s realistic style keeps the piece from veering into melodrama. Events happen realistically, with beautiful and sparse western Americana landscapes bridging the gap between plot points. I could see the film being more effective being a short story or even a short film, any medium that where the material didn’t need to be stretched and could be very direct with its point. Its wandering and slow nature makes the film seem way longer than its 90-ish minute runtime. We eventually reach our destination but its impact is muffled.

Despite some growing pains, The Short History Of The Long Road tells a quiet and effective coming of age tale. But it’s really Carpenter and Trejo’s performances that will last longer in your memory than the plot.

The Short History Of The Long Road will be screened at select drive-in theaters starting June 12th and is available on-demand on June 16th. You can watch the trailer below.