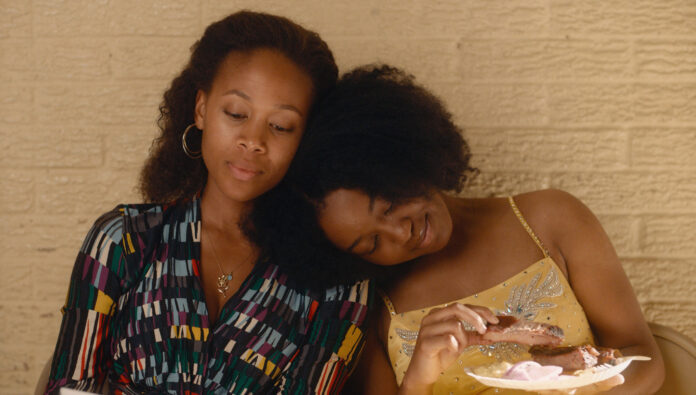 Today is Juneteenth, the holiday that commemorates the ending of slavery in the US, two years after the Emancipation Proclamation. It’s a day for the Black community to recognize and celebrate the lengths, challenges, and successes they have overcome since June 19, 1865. Festivities often include cookouts, street fairs, and family get-togethers. In Fort Worth, Texas the holiday is celebrated through the Miss Juneteenth Scholarship Pageant. This real-life pageant becomes the backdrop in writer and director Channing Godfrey Peoples’ aptly titled film Miss Juneteenth, exploring what Black excellence and legacy really means.

Turquoise Jones is a former Miss Juneteenth winner, who despite winning the crown and a scholarship to boot, hasn’t made the strides in her life that she expected to. She works at a BBQ and bar-joint and part-time at a funeral home. What she brings home, she puts toward her fourteen-year-old daughter, Kai (Alexis Chikaeze), and her future pageant career. Her on and off again husband helps out when he can but is unreliable. Her personal life comes to the surface when she enrolls Kai into the Miss Juneteenth Pageant. Kai is resistant to her mother’s wishes, instead wanting to join the dance team and not do the pageant. There she is faced with her past, her failures, and whether or not she wants to pass on that trauma to her own child.

Nicole Beharie gives a captivating and controlled performance as Turquoise Jones. She brings dignity and a new dimension to the beauty pageant mom trying to fulfill unfulfilled dreams through her daughter. You feel her strength and pain trying to appease the upper-middle-class Black community of the pageant world and the poorer reality she lives in. Her quiet struggle and full composure through her financial struggles and raising her child on her own pulls you in and allows you to empathize with her even when she is pushing her wants on her child. Beharie’s performance is the beating heart of this film and without it, it would have fallen flat.

Some of the supporting cast can’t compete with Beharie’s performance though. Some seemingly acting in a satire and others in a melodrama. This ultimately adds to the uneven tone. While Peoples’ story is compelling and new, at times the action drags and the film’s meaning is hidden in the aftermath. Premiering earlier this year at Sundance, People’s direction is overflowing with passion and that indie quality audiences crave but her tone is not always even and often dark. Certain songs on the soundtrack don’t exactly fit where they are and it feels like there’s levity missing from the story.

Ultimately Miss Juneteenth is a story of maternal love, understanding, and resilience, Despite some directorial missteps, Nicole Beharie’s performance catapults this film into a higher caliber, leaving a quiet but powerful aftershock in its wake.

You can watch Miss Juneteenth on on-demand, iTunes, and Amazon. Watch the trailer below.

‘Miss Juneteenth’ Trailer: Nicole Beharie Is An Ex-Beauty Queen Who Wants More For Her Daughter