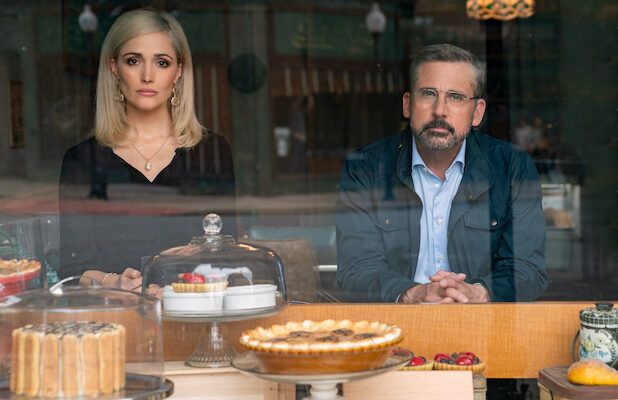 One of the reasons Trevor Noah hasn’t quite clicked with The Daily Show audience as Jon Stewart did, is that Stewart was more than just funny. He was a political force who could use humor to skewer the system, shed light on what’s broken, and rally the youth to care about what’s going on in the White House. He understood that politics matters in every respect, and used all forms of media, even going so far as to hold rallies, to make that point. With his sophomore effort behind the camera, Irresistible, Stewart shows that maybe some rust has set in being away from the game for so long. While the film has its bygone-era charms, it lacks in the kind of biting insight we come to expect from Stewart.

Stewart tries to play it clever with Irresistible, a film that presents itself as harmless and good-natured, a Mr. Smith-esque fable about a good man facing down an entrenched and corrupt system of corruption. But where Stewart fails is that, well, it actually turns out to be harmless whether he wanted it to or not. While still enjoyable because of the cast and low-key nature of the laughs, is that what anybody expects from Stewart?

Irresistible is led by two comedic heavyweights, Steve Carell and Rose Byrne, who are both playing characters they could do in their sleep, only with more talk of polling numbers and gerrymanders. Set sometime after the Orange Wedding…er, the election of Trump, the film stars Carell as Democratic strategist Gary Zimmer, who has found what he thinks is the perfect candidate in Marine colonel Jack Hastings (Chris Cooper). A resident of Deerlaken, Wisconsin, Hastings is seen in a viral video giving an uplifting speech about defending immigrants and the less fortunate. It’s the kind of message that resonates with liberals, delivered by a guy who looks like he just walked out of a MAGA rally, a no-nonsense farmer who could capture disillusioned conservatives and independents. All Jack sees is a chance for the Democrats to win back America’s heartland.

Flying into Deerlaken, Gary is immediately a fish out of water, and this is when Stewart starts to lose his way. You can already see the jokes as city boy Gary tries to win over the small-town locals, driving his rented SUV into a town he only just read about on Wikipedia, sporting a beard that looks painted-on rather than rugged, and demanding burgers ‘n fries because it sounds like something they’d eat? Despite his phoniness, Gary convinces Jack to run for mayor in hopes that the RNC would see it as a threat and spend national resources in a place they normally wouldn’t. And so the plan works, as they send in Gary’s worst nemesis/friend-with-benefits, strategist Faith Brewster (Byrne), who is so unscrupulous she makes Sara Huckabee-Sanders look like she belongs in a convent. She’s there to bolster the incumbent’s campaign, and wrinkle her nose up at the hicks a bit more brazenly than Gary does.

Stewart sets up camp in middling territory, refusing to go too far in disparaging either side of the ideological aisle. And that’s the big problem with Irresistible; it’s just bland and milquetoast without the sharp critique that is needed at the most polarizing time in our history. The cake is already baked that the Republican side is unprincipled, so Stewart does his best to keep the playing field even and proving that both sides are part of a swamp that needs draining. An example finds Gary taking Jack to a fundraiser in New York so he can loosen up the purse strings from those infamous liberal elites who are so eager to throw money at a “cause”, whatever’s hot at the time.

So you get it, both sides suck. Both are shockingly inauthentic and will they drag a good, decent man like Jack into the mud with them? Stewart attacks this question with all the subtlety of John Boehner’s oversized House gavel. Jack finds his morals challenged at every turn, while Gary cooks up insulting ad campaigns (One has Jack fishing with a machine gun), obsessing over polling data, and making eyes with Jack’s stern 28-year-old daughter Diana (Mackenzie Davis).  Whatever personality this town once had is all about raw numbers to Gary, whether that’s in polling or contributions. Stewart also wants us to realize the media’s part enflaming the culture wars that keep us divided, but he doesn’t seem to have much to say about doing anything about it.

Irresistible is low on solutions to the current political crisis, but worse it’s also low on laughs. Stewart wants us to stop fighting with ourselves and start taking on those who seek to keep us at one another’s throats, but to do that requires some hard truths that must be accepted. Stewart is unwilling to lend voice to those truths so that he can appear nonpartisan, but by tacking so far to the center he’s rendered Irresistible as bland as an “undecided voter.”

Somehow, Stewart still feels his film is a real force for change, concluding with a call to “RESIST.” The anti-Trump buzzword is a rallying cry Irresistible does little to earn.