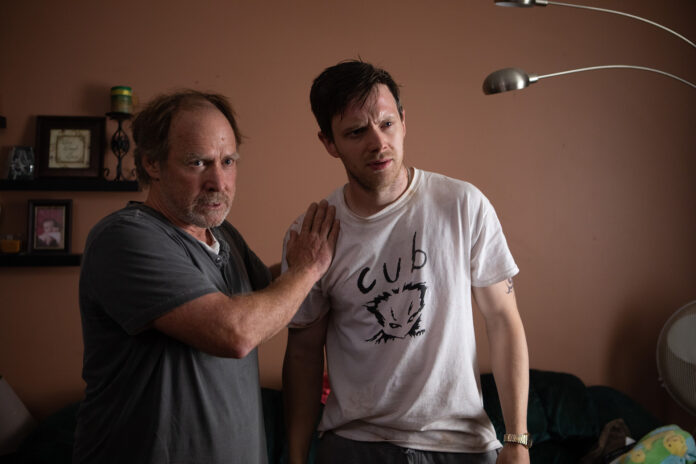 Hammer explores how the decisions of one member of a family can impact the rest. The Davis family sees this firsthand after their oldest son Chris (Mark O’Brien) has engaged in some questionable activities. It seems like history is repeating itself for Chris when he is involved in a botched drug deal. Chris is getting into some shady business with two of his old friends Lori (Dayle McLeod) and Adams (Ben Cotton). Lori and Adams have known Chris for quite some time and have gone down a bad path themselves. Adams has been to prison in the past and has pledged not to go back. When the drug deal turns ugly, Lori and Adams end up shot and Chris flees the scene with the money. Chris decides to stash some things in a local corn field, with plans to return once the coast is clear. 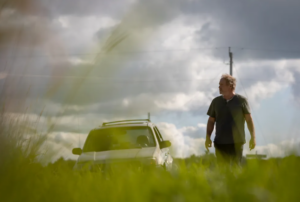 Chris’s father Stephen (Will Patton) happens to be on an errand when he sees Chris speed by on a motorbike. Stephen follows Chris and eventually gets him to accept his help unraveling the mess he is in. Of course, Chris is lying to Stephen and completely misrepresenting what has actually happened. Stephen becomes more and more entangled in Chris’s chaos as the day goes on. Not only is Stephen drawn in, but the Davis’s youngest son Jeremy (Connor Price) is now in danger as well. On top of that, Stephen is forced to lie to his wife, who is still trying to keep it together after Chris’s last run in with drugs. As things come to a dangerous head, Stephen is left to question if he even knows who his son is anymore, or what he is capable himself.

Hammer begins by highlighting the dichotomy in Chris and Stephen’s lives, with Writer/director Christian Sparkes contrasting them against each other. Everything from the camera shots, colors of the scenery, to the relaxing music is calm and collected when showing Stephen. As Chris pulls Stephen into his hectic world and Stephen is forced to do unthinkable things, these items begin to become more and more similar. 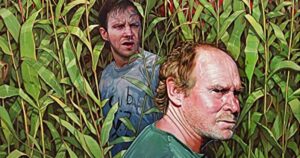 Patton is excellent throughout portraying a father that is at the brink. A man that would do anything for his son, but one that is still trying to impart wisdom. Stephen never gives up on Chris, no matter who else in his life has. Patton does overshadow O’Brien, but O’Brien still turns in a solid performance. The emotion between Patton and O’Brien comes off incredibly genuine and that helps draw the audience in to the story. Their relationship is at the center of Hammer and the chemistry the two of them share is vital to the film.

Sparkes tells a coherent tale weaving multiple story lines and characters together. He does not need to resort to over-the-top violence or action as many modern thrillers feel the need to. Hammer is driven by its script and the acting of its leads. While there are lots of positive things to say about Hammer, the film does have issues. Most notably being how Chris and Stephen blatantly break the law numerous times in broad daylight. I was left wondering how they could be so obvious and brazen. I guess desperate times call for desperate measures and Chris and Stephen sure are desperate. Hammer is an entertaining thriller/drama, but not one I expect to have any true staying power. It is an enjoyable film, but the truly memorable moments or scenes just aren’t there. Hammer is certainly worth a watch, but it will most likely be one and done for most.