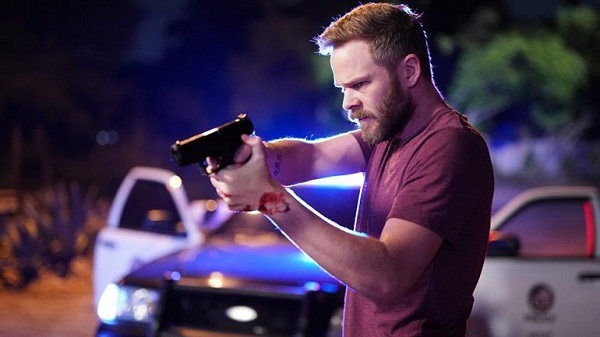 If the tagline feels like a spoiler, don’t worry: the trailer gives those details away as does the first five minutes of Darkness Falls.

Before we are even introduced to our hero Detective Jeff Anderson (Shawn Ashmore of OG X-Men fame), we get introduced to a grisly murder of Elizabeth (Vahina Giocante) by two killers who have a pretty unique way of killing their victims in a horrible fashion that leaves no trace and makes it look like a suicide. As this is almost the perfect crime, the killers are very calm and collected as they do their deed. Little do they know that their victim is the wife of a cop.

Jeff is one day away from making Captain and is just excited to come home from work to spend some time with his wife and son (Judak Mackey) when he walks in on the one thing absolutely no one on earth wants to ever see in their life. Even though he shields his son from witnessing the unspeakable, his son does comment that he had a nightmare that two men were in the house. This leads Jeff down a dark spiral as he starts to become obsessed with all suicides thinking they are murders. With the city he’s in having more than 1000 suicides a year, he’s starting to look like the crazy guy. He even gets the nickname “the suicide cop.” With his peers thinking he’s crazy, and his former partner-turned-captain (Daniella Alonso) concerned for his well-being, and barely seeing his son as he lives out his car while the kid’s with grandma, he’s spiraling away.

Of course, he finally threads the needle and gets hip to what the killers (Gary Cole and Richard Harmon) are actually doing and manages to catch them just as they are about to continue their murders, which leads to even more crazy outcomes as a game of cat-and-mouse commences. It feels as though the filmmakers saw Seven and tried to make Darkness Falls in that same vein. Even when you finally learn the motive from the serial killers, it still feels strange and doesn’t make too much sense.

While it’s mostly predictable, Darkness Falls has a somewhat satisfying ending. Unfortunately, the film’s writing and lead aren’t strong. Ashmore is a fan-favorite as Iceman from X-Men and other films/TV shows, he doesn’t really nail this movie as the lead. There’s a moment about halfway through the film where he goes full-on “A Beautiful Mind” as he’s trying to “get inside the head” of the killers and goes on a weird rant that really comes out of left field, and isn’t acted very well. On the other hand, Gary Cole really delivers as one of the serial killers. Cole’s often known from his comedy bits (and most recently as a lovable racist grandpa on Mixed-ish), but he turns up the intensity in Darkness Falls as one half of the deranged killing duo. He’s genuinely a terrifying character. The other killer is played by Richard Harmon (who is probably best known for playing self-serving delinquent Murphy from CW’s The 100), so playing a serial killer isn’t a far stretch for him.

Unfortunately, at a brisk 84 minutes, Darkness Falls feels too rushed. This probably would work better as a limited TV series and give more time to flesh out the motivation behind the killers (or see them more in action). In a perfect world, this idea would work better on TV with Detective Anderson as someone who “hand a hunch” and started investigating these kills, only for his wife to get caught up in it and then have him spiral downward while seeking justice. But instead, the way the film is presented (as time skips around for no reason), it feels a little too rushed.