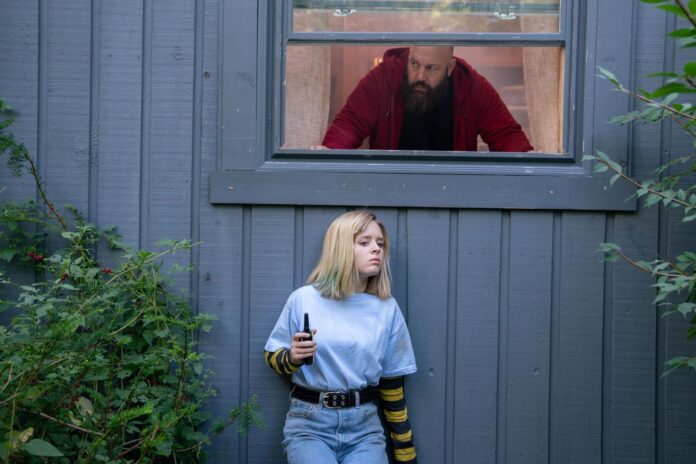 Did anyone else want to be Kevin McCallister as a kid? By yourself, no parents, no rules, and you get to outsmart two burglars with wacky hijinks. Well, directors Johnathan Milott and Cary Murnion and writers Nick Morris, Ruckus Skye, and Lane Skye took that concept, added real-world consequences to it and amped up the gratuitous violence up to an 11. One would think that they were watching Home Alone on bath salts. In reality, Becky is an exciting but slightly underdeveloped thrill ride that shakes up the home invasion drama.

Playing the titular character that the entire film hangs it’s hat on, is Lulu Wilson (The Haunting of Hill House, Sharp Objects). Reeling with her mother’s recent death and her father’s (Joel McHale, Community) new relationship, Becky has entered her teen years in full angst. Forced to spend the weekend at the family cabin with said-new girlfriend (Amanda Brugal, The Handmaid’s Tale) and her son, Becky’s plan of avoidance and quick quips are put on pause with the arrival of Kevin James’ Dominick, an escaped prisoner who also happens to be the leader of a neo-nazi gang. After taking he and his posse take everyone but Becky hostage in search of a family heirloom, Dominick awakens something dark and primal in Becky. It’s like if Kevin McCallister suffered from severe PTSD and family trauma and then had to deal with his home being invaded by neo-nazis escaped-convicts.

James gives one of his stronger performances, showing a menacing side we haven’t really seen from the comedy star. His chemistry with Wilson though is electric, playing off each other like a bloody violin duet. Despite being 13 at the time of filming, Wilson easily handles the emotional complexities and demands of the character.

Greta Zozula’s cinematography completely elevates the film past the over-done home invasion troupe, creating captivating visual storytelling through her playful approach to closeups and perspective. Cinephiles will notice stylistic nods to Hitchcock and Kubrick, it’s first few moments referencing the first few moments of The Shining, complete with a jarring and ominous soundtrack and car driving down an abandoned winding road. Speaking of soundtracks, Nima Fakrana’s suspenseful score immerses you into the tension of the story, its breathy and abrasive instrumental playing with your narrative expectations.

Its ending doesn’t exactly give you the catharsis you want, which leaves more questions than answers. Becky’s fate, the film’s hidden meanings, and the origins of James’s character are left completely open, creating a vagueness and mystery quality that adds to the film and its hype. At times, the dialogue and a few narrative devices seem a little trite, but it’s the overall story and aesthetic that saves the film from seeming campy.

Becky’s main problem is its release date. To say this film is violent and bloody would be an understatement. A few moments are downright shockingly gruesome. At a time when people are protesting the death of a man killed under the knee of a police officer and America is once again reckoning its own dark history with violence, one may question whether we need to watch a white supremacist version of Kevin James and clearly hurting and traumatized child running around the woods, wreaking bloody havoc over a family heirloom. I really don’t have an answer for this other than it could be a matter of preference or that it may fill some animalistic urge inside us all to watch violence instead of acting on it. However, I do believe it’s graphic content is worth knowing before going to watch it.

Because of our current climate, Becky might not be the film everyone sees right away. But it does have the makings of a heart-pumping cult favorite. It’s vagueness and shock value will only add to its buzz, being THAT film two bros at the bar will argue conspiracy theories in about 5 years.

Becky hits VOD, select theaters and select drive-ins this Friday, June 5. Watch the trailer down below.

Review: ‘Assassination Nation’ Is #MeToo And #TimesUp Meets ‘The Purge’