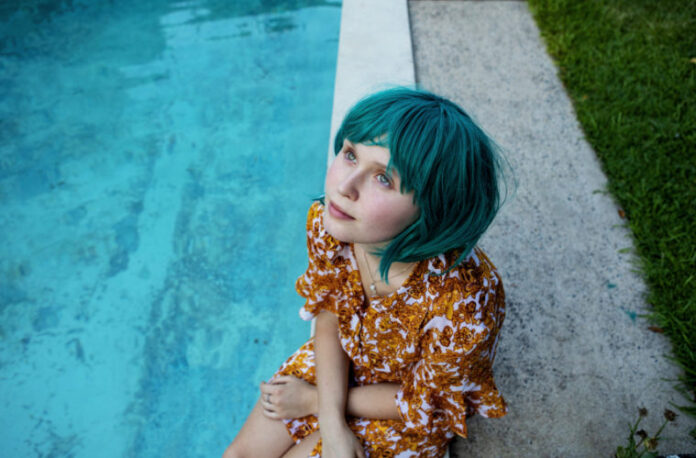 Babyteeth, the confident and heartbreaking debut feature from Shannon Murphy, sounds like one of those YA cancer dramas that have become all-too prevalent of late. But this isn’t another story of star-crossed, terminally-ill lovers who meet in the same hospital room, trading kisses as easily as they trade gallows humor. Rarely does it tread into the drippy sentimentality we expect,  but like those aforementioned films it does feature at least one performance sure to turn heads: Little Women actress Eliza Scanlen.

Prepare for another tear-jerker of a role from Scanlen, who plays the wide-eyed 15-year-old Milla. With her wild, colorful hair we know she’s not as innocent as she looks, and that’s after we learn of her unspecified cancer diagnosis. She’s struggled with it for a long time, and her parents, retired musician Anna (Essie Davis) and psychiatrist Henry (Ben Mendelsohn) are so protective they ignore their own demons. When Milla chances into a meeting with the tattooed, rat-tailed Moses (Toby Wallace), we know the 23-year-old is instant trouble. But the chemistry between them is just as quick and just as obvious.

For all of Moses’ problems, like being a drug addict, a thief, and a liar, his adoration for Milla is clear. That’s something it’ll take some time for her parents’ to accept, even after she let’s him shave her head prior to a new round of chemo treatments. It’s a simple act, but sensitive, intimate one that shows a deepening bond. Even when Moses messes up, which he does almost as a self-destructive reflex against such intimacy, Milla can see more of him than what is on the outside.

Murphy and her cast shows their deft handling of characters’ emotions, aided by a perfectly-balanced script by Rita Klanejais, in Moses’ first dinner with the entire family. While Milla is over-the-moon with first love energy, her father is considerably less thrilled but analytical of the situation. Meanwhile, Anna finds the whole thing pretty hilarious, a side effect of being too doped up to care that their dinner guest probably is, as well.

In lesser hands, that scene would’ve exploded into screaming matches and sitcom hysterics. We keep waiting for Babyteeth to follow suit, but Murphy never allows the film to settle into just one thing. Breaking each period in Milla’s life into segments, her story unfolds like chapters in a dizzying melodrama. While never completely out of mind, her cancer simmers underneath every interaction and confrontation. The happy times between young lovers are fit to boil over with excitement; while the tragedies darken with a terrifying sense of finality.  At its core, Babyteeth is about people trying to get as much out of life as they can, for fear that they may lose it all someday soon.

There are moments of humor, as well, mostly provided by Moses who stumbles into the occasional scheme that falls flat. Stylistically, Murphy’s many chapter breakdowns have a tendency to disrupt the film’s momentum, although the terrific cast always pull each scene back on track. Scanlen’s portrayal of Milla is bright and open, as if she’s devouring everything the world has to offer and more. Wallace is just as good at maintaining Moses’ rough edges while a sensitivity resides beneath the scarred exterior. But the final act really belongs to Mendelsohn and Davis, and we only get a sense of how reserved they’ve been when the final moments explode with acts of betrayal and mercy. That Babyteeth doesn’t devolve into conventional norms of the genre is a testament to all involved in this devastating film about people trying to make due with the life they’ve been given, even when hope seems out of reach.