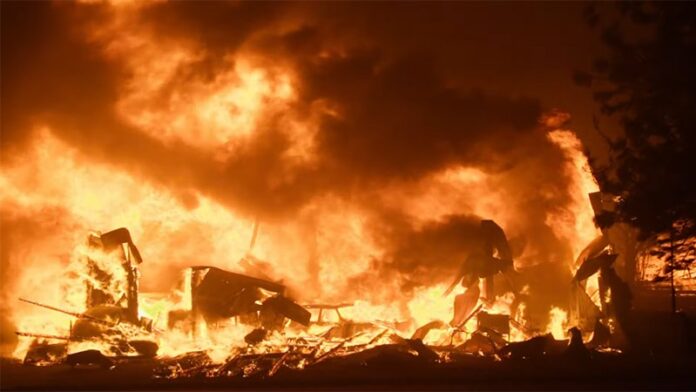 2018 was one of California’s worst wildfire seasons. 8,527 fires destroyed communities, homes, forests, and wildlife from February to December. 103 people were killed and over 3.5 billion dollars in damage has been reported. Most of those deaths and damage was due to a fire that took place on Nov. 8, leaving the community devastated. Today legendary director Ron Howard and National Geographic released the trailer for Rebuilding Paradise, a documentary documenting the fire and its effects on the California community of Paradise.

The trailer not only hints at the total destruction of the town but at the complicated decisions and politics that follows a deadly fire. Should people try to rebuild? Is it environmentally responsible to rebuild? How do we move forward? According to the studio, the film’s synopsis is as follows.

On the morning of Nov. 8, 2018, a devastating firestorm engulfed the picturesque city of Paradise, California. By the time the Camp Fire was extinguished, it had killed 85 people, displaced 50,000 residents and destroyed 95% of local structures. It was the deadliest U.S. fire in 100 years — and the worst ever in California’s history. REBUILDING PARADISE, from Academy Award-winning director RON HOWARD, is a moving story of resilience in the face of tragedy, as a community ravaged by disaster comes together to recover what was lost and begin the important task of rebuilding.

The intense but hopeful looking documentary premiered at this year’s Sundance and is set be released in select theaters July 31st. No word yet if the film will be streaming on the Disney+ app, but my guess is that with the corona-virus keeping people inside, the documentary may find its home on the streaming site.

Ron Howard To Direct His First Animated Feature, ‘The Shrinking Of Treehorn’

Ron Howard Says A ‘Willow’ Series May Be Happening On Disney+