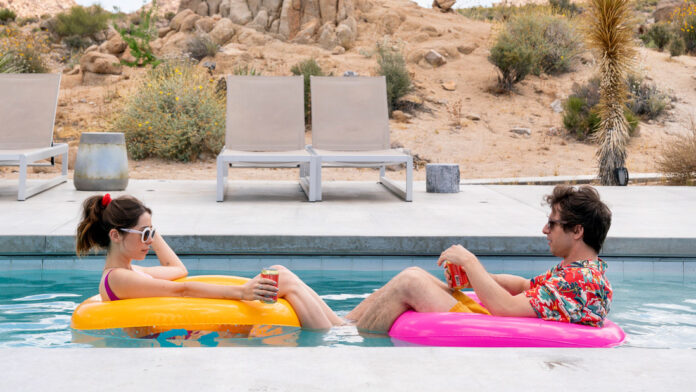 When Lonely Island’s comedy Palm Springs hit Sundance about a thousand years ago (okay, it was in January but it feels like a thousand years), it was met with such tremendous buzz that Neon and Hulu came calling, checkbooks wide open. The film became the most lucrative acquisition in festival history, with a big theatrical release planned. Well, then COVID-19 happened, and the anticipated film is now going straight to Hulu next month.

Following in the footsteps of Groundhog Day and most-recently Happy Death Day, the time-loop premise of Palm Springs has been given a twist. Andy Samberg and Cristin Milioti play singles forced to relive the same crappy wedding  day over and over again. What’s worse, it’s not even their wedding! Hijinks ensue, of course. J.K. Simmons, Meredith Hagner, Camila Mendes, Tyler Hoechlin, and Peter Gallagher co-star, with Max Barbakow making his directorial debut.

SYNOPSIS: When carefree Nyles (Andy Samberg) and reluctant maid of honor Sarah (Cristin Milioti) have a chance encounter at a Palm Springs wedding, things get complicated when they find themselves unable to escape the venue, themselves, or each other.