Home News Disney ‘Muppets Now’ Trailer: Kermit And The Gang Are Back With Loads Of...
Facebook
Twitter 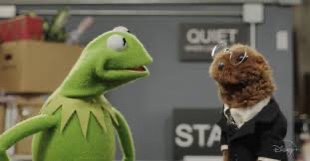 It’s time to put on makeup. Its time to light the lights. Its time to meet the Muppets on The Muppet Show tonight. Well not yet. Kermit and Jow the Otter from Disney+’s legal department announced today that a new Muppet show is coming to the platform, but they couldn’t say much more than that. “The Muppets are getting together to make some fun thing for Disney+,” is all Kermit could “legally” tell us in the new trailer for Muppets Now.

Despite being mum on the exact format and content of the show, we could see that it will have guests stars, sketches, and the usual Muppet frivolity that we are used to. Linda Cardellini, Rupaul, Seth Rogan, Taye Diggs, Aubrey Plaza are all seen whooping it up with Kermit, Miss Piggy, Beaker, and the like in the trailer. This new iteration seems to have more of a chat show feel rather than a variety show feel that the original Muppet Show had.

The show will stream on Disney+ and have six weekly 10 minute episodes and was first announced in early 2019. If you can’t wait to get your Muppet fix, the streaming service currently has a wide range of Muppet content including The Muppets, Muppets Most Wanted, The Muppet Movie, and The Great Muppet Caper. Unfortunately the original Muppet Show is not on there at this time.

The new series original series is set to premiere July 31st on Disney+. You can watch the trailer below.

New ‘Hamilton’ Clip Released Ahead of Next Week’s Premiere