If you’ve been following the site for any length of time, you know my favorite thing is being able to combine movies with one of my other passions: professional wrestling. Yesterday was one of those opportunities, as I had a chance to talk with Stu Bennett, star of the awesome action sequel I Am Vengeance: Retaliation, and better-known to WWE fans as Bad News Barrett.

The film, a sequel to 2018’s I Am Vengeance, stars Bennett as ex-special forces soldier John Gold, with Vinnie Jones as his nemesis Sean Teague, the man who betrayed him years earlier. Not only do we get to see these two bruisers throwdown, but the cast from top to bottom is full of some of the best stuntpeople in the business. 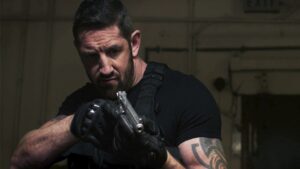 I talked with Bennett about making the move from pro wrestling to acting, and being one of the few to command their own franchise. He also talked about the bumps and bruises he got while filming, trading punches and admiration with Jones, and the possibility of getting all the wrestler/actors together in one movie.

Check out my interview with Stu Bennett below, and my review of I Am Vengeance: Retaliation here. The film is available digitally tomorrow, June 19th.

Podcast: Talking ‘7500, ‘I Am Vengeance: Retaliation’, Theaters Reopening, And More

Review: ‘I Am Vengeance: Retaliation’