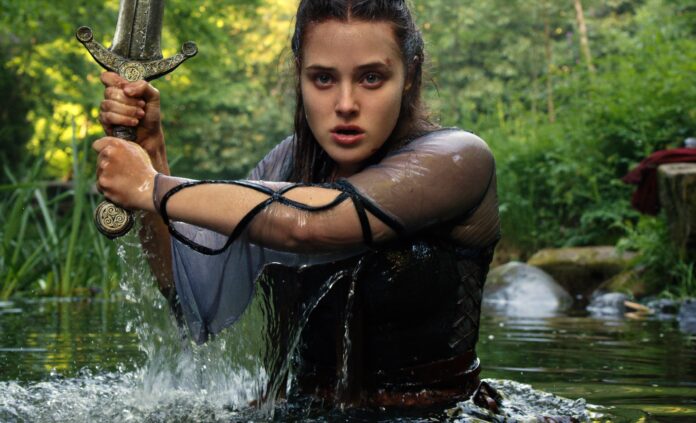 There have been many updated versions of the King Arthur legend, some of them very recently, but here’s one that may actually present it from a fresh angle. Cursed is a new series headed to Netflix, and it stars 13 Reasons Why‘s Katherine Langford as the Lady of the Lake.

In Cursed, Langford takes on the role of Nimue, who will eventually become the Lady of the Lake and the one who gifts Arthur with the sword Excalibur. She has yet to attain that role in this series, but finds herself drawn to a mercenary named Arthur and a quest to find Merlin and deliver a mysterious sword.

There’s some interesting talent behind the camera, with Tom Wheeler as co-creator and showrunner alongside comics legend Frank Miller. Miller and Wheeler collaborated on the graphic novel, which should ensure a faithful adaptation. Miller is well-versed in adapting his own comics for the screen, as he did with Sin City and Sin City: A Dame to Kill For. Wheeler created the short-lived series The Cape, and wrote movies Puss in Boots and Lego Ninjago.

SYNOPSIS: Based on the New York Times bestselling book, Cursed is a re-imagination of the Arthurian legend, told through the eyes of Nimue, a young woman with a mysterious gift who is destined to become the powerful (and tragic) Lady of the Lake. After her mother’s death, she finds an unexpected partner in Arthur, a humble mercenary, in a quest to find Merlin and deliver an ancient sword. Over the course of her journey, Nimue will become a symbol of courage and rebellion against the terrifying Red Paladins, and their complicit King Uther. “Cursed” is a coming-of-age story whose themes are familiar to our own time: the obliteration of the natural world, religious terror, senseless war, and finding the courage to lead in the face of the impossible.

‘Cursed’ Trailer: Katherine Langford Is The Chosen One In Netflix’s Arthurian Drama Series

‘Knives Out’ Trailer: Daniel Craig Is On The Case In Rian Johnson’s Star-Studded Mystery