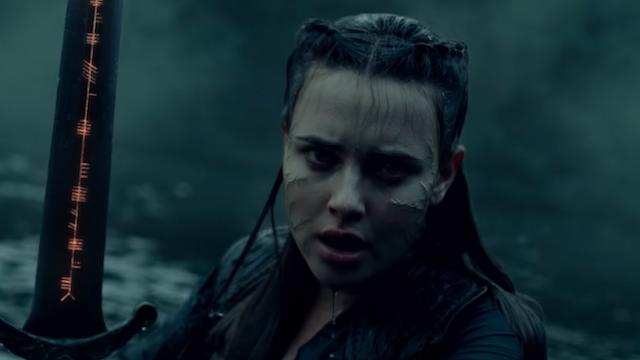 Comic book legend Frank Miller has given us some of the greatest runs of Batman and Daredevil, created 300, and of course, Sin City. So when he creates something new, it carries a lot of weight. Cursed, a reimagining of the Arthurian legend, is based on the bestselling graphic novel by Miller and Tom Wheeler, and it might be the next big thing to hit Netflix.

Why is that? Well, Cursed combines the swords ‘n sorcery of The Witcher with the YA angst of 13 Reasons Why or the streamer’s many popular teen romances.  Plus it stars Katherine Langford, no stranger to the network, in the role of the Lady of the Lake, albeit from a time before she gives the fabled sword Excalibur to Arthur.

SYNOPSIS: Based on the New York Times bestselling book, Cursed is a re-imagination of the Arthurian legend, told through the eyes of Nimue, a young woman with a mysterious gift who is destined to become the powerful (and tragic) Lady of the Lake. After her mother’s death, she finds an unexpected partner in Arthur, a humble mercenary, in a quest to find Merlin and deliver an ancient sword. Over the course of her journey, Nimue will become a symbol of courage and rebellion against the terrifying Red Paladins, and their complicit King Uther. Cursed is a coming-of-age story whose themes are familiar to our own time: the obliteration of the natural world, religious terror, senseless war, and finding the courage to lead in the face of the impossible.

‘Knives Out’ Trailer: Daniel Craig Is On The Case In Rian Johnson’s Star-Studded Mystery