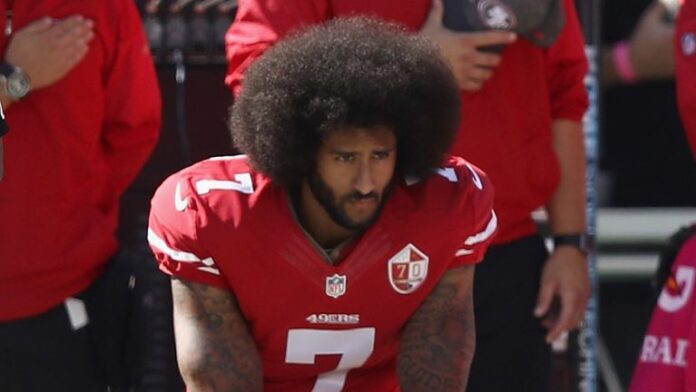 Colin Kaepernick wasn’t the first to publicly protest the police brutality and racism plaguing this country, but it was his silent protests in 2016 that launched a national conversation. By quietly kneeling during the National Anthem ahead of his NFL games, Kaepernick lit a fuse that continues to burn, despite some people in very high places pretending his protests were somehow unpatriotic. In an interesting turn, the murder of George Floyd has completely turned public perception in Kaepernick’s favor, making his story one that people want to see told.

And so, it’s happening. Kaepernick is teaming up with Ava DuVernay and Netflix for a TV series titled  Colin in Black & White. And no, this isn’t about his time as an NFL QB, it’ll center on his formative high school years that inspired his current activism. Kaepernick was a black kid taken in by a white family, and dealt with his share of identity issues as a result.

The series will be written by Michael Starrbury, who co-wrote DuVernay’s When They See Us. He’s also attached to pen the upcoming heist comedy The Come Up from Hair Love director Matthew A. Cherry. Starrbury has already written the scripts so production could begin quickly.

“With his act of protest, Colin Kaepernick ignited a national conversation about race and justice with far-reaching consequences for football, culture and for him, personally,” said DuVernay. “Colin’s story has much to say about identity, sports and the enduring spirit of protest and resilience. I couldn’t be happier than to tell this story with the team at Netflix.”

Kaepernick said, “Too often we see race and Black stories portrayed through a white lens. We seek to give new perspective to the differing realities that Black people face. We explore the racial conflicts I faced as an adopted Black man in a white community, during my high school years. It’s an honor to bring these stories to life in collaboration with Ava for the world to see.”