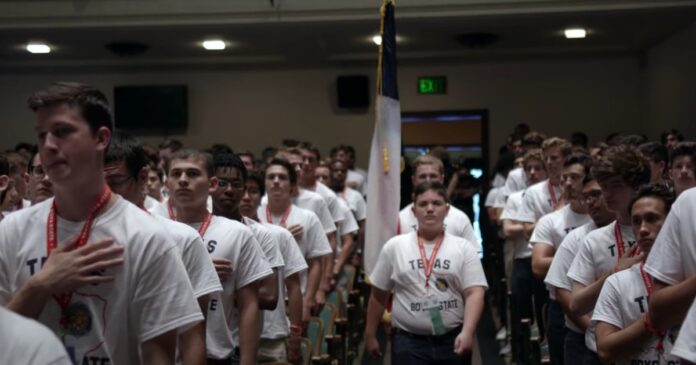 Times are tough, the country is divided more than ever, and I’m not even talking about the coronavirus. If you need a little bit of hope that we can come together and look beyond our differences, then the documentary Boys State should be on your list.

Debuting at Sundance, Boys State was met with rapturous reviews, ultimately winning the award for Best Documentary Feature at the festival. Directed by Jesse Moss and Amanda McBaine (The Overnighters), the film covers an annual event most have probably never heard of. Each year in Austin, Texas a mock exercise is held in which 1000 boys from all walks of life get together to form a government. The exercise reveals the divided politics tearing the country apart, but in their shared experiences it also leaves the door open for things to change.

SYNOPSIS: “Boys State” is a wildly entertaining and continually revealing immersion into a week-long annual program in which a thousand Texas high school seniors gather for an elaborate mock exercise: building their own state government. Filmmakers Jesse Moss and Amanda McBaine closely track the escalating tensions that arise within a particularly riveting gubernatorial race, training their cameras on unforgettable teenagers like Ben, a Reagan-loving arch-conservative who brims with confidence despite personal setbacks, and Steven, a progressive-minded child of Mexican immigrants who stands by his convictions amidst the sea of red. In the process, they have created a complex portrait of contemporary American masculinity, as well as a microcosm of our often dispiriting national political divisions that nevertheless manages to plant seeds of hope.

‘Jay Sebring…Cutting To The Truth’ Trailer: Quentin Tarantino And Others Shed Light On Overlooked Manson Victim