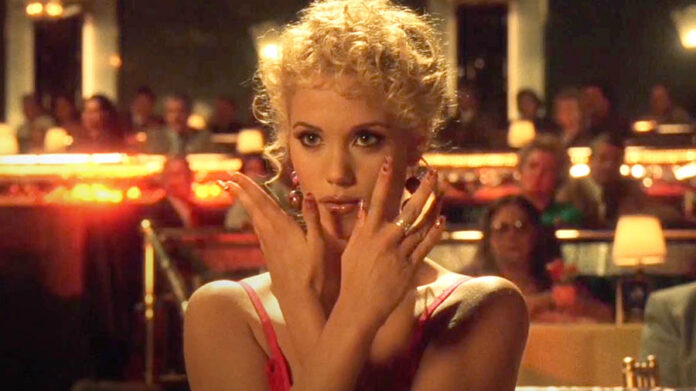 Paul Verhoeven’s Showgirls is one of those movies everybody has a strong take on. Released in 1995, the erotic drama, which starred Saved By the Bell’s Elizabeth Berkley in a career-destroying role as a Vegas stripper who struggles to become a renowned showgirl, the fairly-expensive film was a dud at the box and a veritable army of critics absolutely killed it. But in the years since, something has changed, and Showgirls has emerged as a dark-comedy cult classic, inspiring stage shows and packing midnight screenings across the country. And that unlikely journey from box office flop to masterpiece is what the documentary You Don’t Nomi is all about.

You Don’t Nomi charts the fall and unexpected rise of Showgirls, seen through the eyes of its greatest detractors and most adoring fans. The film features Adam Nayman (Vice Guide to Film), April Kidwell (I, Nomi), and Peaches Christ (Milk), as well as archival footage of the crew and cast, which included Gina Gershon and Kyle MacLachlan. Also included is our friend and GoldDerby.com film critic Susan Wloszczyna, who was one of the few to give Showgirls a mild thumbs up. Maybe we should invite her on the show to talk about that?

Personally, I find Showgirls to be beautifully stupid, a garbage movie that I will watch any day of the week. It falls into the so incredibly bad it’s good territory, and for pure entertainment value, especially with a crowd, it’s pretty tough to beat. But for those who just completely write the movie off, you have to remember this is Paul Verhoeven, the guy who gave us edgy satires Robocop and Starship Troopers. Understand the wavelength he’s working on. It doesn’t explain the horrid acting and questionable camerawork, though.

You Don’t Nomi hits digital and VOD on June 9th.