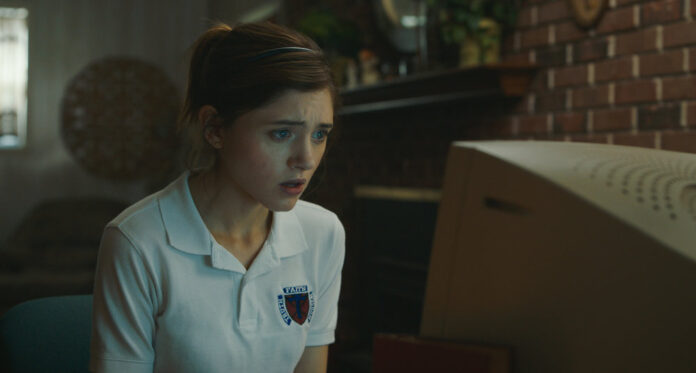 The film marks the directorial debut of Karen Maine, a co-writer on the short film Obvious Child, which became the acclaimed sex-positive comedy starring Jenny Slate. Once again, Maine is exploring a young woman’s sexual awakening, while shedding a humorous light on some of the contradictions of being a person of faith with natural human urges. Like Obvious Child, this also began life as a short.

Based on this trailer I’m reminded of the 2004 comedy Saved! which covered very similar territory.

Yes, God, Yes opens in July. Its world premiere was at SXSW last year, and so far has a 100% on Rotten Tomatoes.  Might be worth a look.

SYNOPSIS: In the Midwest in the early 00s, sixteen-year-old Alice (Natalia Dyer) has always been a good Catholic girl. But when an AOL chat turns racy, she discovers masturbation and becomes guilt-ridden. Seeking redemption, she attends a mysterious religious retreat to try and suppress her urges, but it isn’t easy, especially after a cute boy (Wolfgang Novogratz) starts flirting with her. Alice’s sense of shame is spiraling when she uncovers a shocking truth about the retreat’s most devout. Desperate and confused, she flees and meets an unlikely ally (Susan Blackwell) who offers an alternative view of what it means to be good. For the first time, Alice realizes she can decide for herself what to believe and finally gets the release she needs.

The Past Haunts New ’13 Reasons Why: The Final Season’ Trailer