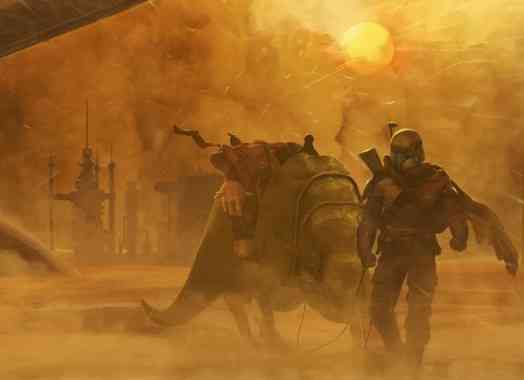 So there’s been an interesting twist in the news of Timothy Olyphant joining The Mandalorian season 2. At that time, we didn’t have any idea who he might be playing. I had suggested another gunslinger because it made sense for the Deadwood and Justified actor, but if a new rumor from /Film is true, Olyphant might be going so far as to wear the Boba Fett armor.

Here’s the deal: Olyphant was seen filming scenes sporting Mandalorian armor resembling Boba Fett’s. With Temuera Morrison, the man who originated the Jango Fett character, recently confirmed to be playing Boba Fett, that might be sorta weird. Well, if Olyphant is playing Boba Fett, then chances are Olyphant is actually in the role of Cobb Vanth, a character introduced in Chuck Wendig’s Aftermath book series.  Vanth was the sheriff of Freetown, a settlement on Tatooine, and enforced the law in a suit of Mandalorian armor scavenged by Jawas from the wreckage of Jabba the Hutt’s ship near the Dune Sea. You might recall in Return of the Jedi that’s where Boba Fett was hilariously thrown to his death in the Sarlacc Pit.

Either way, get ready for Boba Fett! The Mandalorian returns to Disney+ this October.

Timothy Olyphant Saddles Up For ‘The Mandalorian’ Season 2