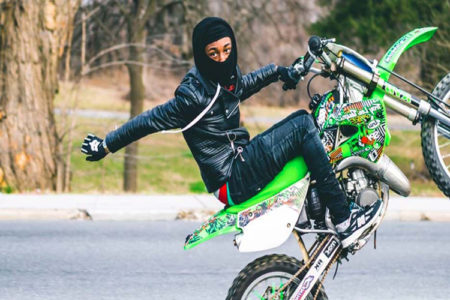 Warner Bros. just picked up Sundance Award winner, and my favorite film from the festival, Charm City Kings, to be part of their HBO Max lineup. The streaming service is set to launch on May 27th, and now it will have one of the most buzzed-about movies of the year.

The deal was struck between Warner Bros. and Sony Pictures, who had planned on releasing Charm City Kings under their Sony Pictures Classics banner. After it won a Special Jury Prize at Sundance, the Baltimore motorcycle drama was to be part of the SXSW lineup before the event was canceled due to the coronavirus. An April release date was pulled for the same reason, and the film rescheduled for this August.

It’s unclear when we’ll see an HBO Max premiere, but it will be later this year.

Charm City Kings takes place in the little-known black motorcycle gang culture in Baltimore. 14-year-old Mouse (Di’Allo Winston) desperately wants to join The Midnight Clique, the toughest biker gang in town, and finds a willing mentor in Blax (a revelatory Meek Mill), who tries to steer him out of the path of criminality and violence. The film was directed by Angel Manuel Soto.

Some will be disappointed to see Charm City Kings head to a streaming platform, but to me it’s just not that important anymore. Chances are more people will see it now than if it had gone theatrical, and that’s really all that matters. Other than one extraordinary chase scene there’s nothing that demands it be seen on a big screen. The performances,  the authenticity of time and place are what hook you, and that’s going to be the case no matter what. [THR]