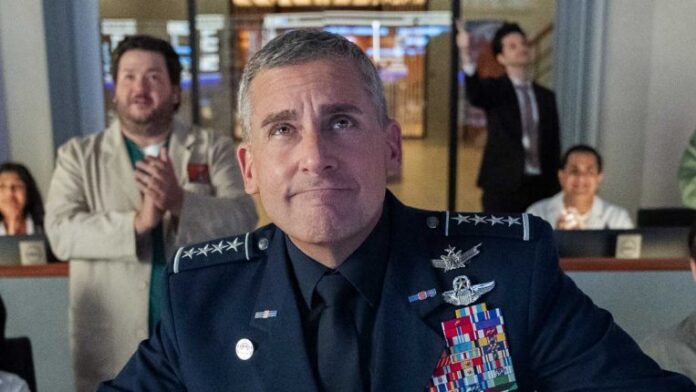 Space Force! I’m sorry, but every time the phrase come up, I imagine it being said the same way as Spaaaaace Ghooooooost!!!!! It’s just hard to take very seriously, despite the real-life place as the apparent fifth branch of the military. And if you’re going to treat something unseriously and turn it into a TV series, Steve Carell is the guy who should be leading it, as he does for Netflix.

It hasn’t been long since we had the first trailer for Space Force, and already Netflix has dropped another one. Created by Carell and The Office‘s Greg Daniels, the show once again puts Carell as an inept leader nobody has any real confidence in to get the job done, which is putting man back on the moon. The cast includes John Malkovich, Ben Schwartz, Tawny Newsome, Diana Silvers, Lisa Kudrow, Jimmy O. Yang, Noah Emmerich, Alex Sparrow and Don Lake.

SYNOPSIS: A decorated pilot with dreams of running the Air Force, four-star general Mark R. Naird (Steve Carell) is thrown for a loop when he finds himself tapped to lead the newly formed sixth branch of the US Armed Forces: Space Force. Skeptical but dedicated, Mark uproots his family and moves to a remote base in Colorado where he and a colorful team of scientists and “Spacemen” are tasked by the White House with getting American boots on the moon (again) in a hurry and achieving total space dominance.

Space Force blasts off for Netflix on May 29th, and will be joined by a podcast that you can check out here.

‘Space Force’ Trailer: Steve Carell Is The Man To Lead America Back To The Moon