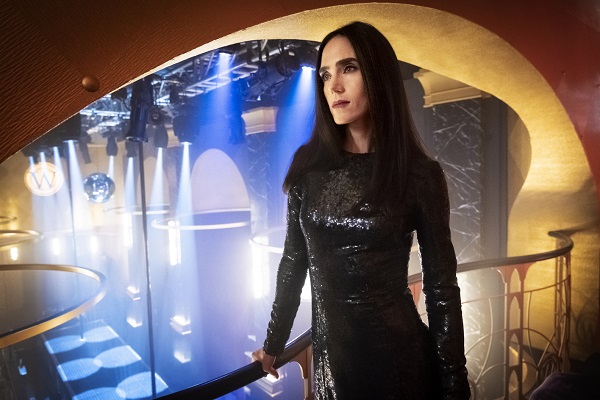 In last week’s episode of Snowpiercer, the show steered a little bit back towards the classicism that made Bong Joon-ho’s film ever so timely while still maintaining a delicate balance to further explore the murder mystery the show is centering on. It no longer feels like a standard police procedural, but now is as multi-layered as the many different train cars on Snowpiercer. This week’s episode “Access Is Power” explores yet another layer: underground crime and distraction for the masses by the upper class.

The episode begins with an almost Breaking Bad type of beauty showcasing how an object on the train goes from its inception, through all the hands it touches for commerce and deal-making through its existence. In the world of Snowpiercer, it doesn’t seem as though there’s a set standard for currency, so things of personal value equal cash, and the one thing everyone wants to trade-in/up is access. Everyone wants access to the first-class section of the Snowpiercer, so the currency trades many hands for everyone’s pursuit of access. The narrator of this monologue is the medic who manages those put in cryosleep and how he is also key to everything. He provides a vital tool for commerce, which allows him to have use on Snowpiercer in multiple ways: legal and criminal.

Layton, fresh off his little stint of engaging in a fight with guards to provide a distraction to try and pass train information to the Taillies is recuperating from his beating. While in isolation, he reminisces when his now ex-wife Zarah left the tail section to go and work in the Night Car. She has had it with the hell of living in the tail section and figures working at a brothel is better than living in squander. He gives her his wedding ring as a form of currency to trade in case she gets into any trouble. As Zarah leaves the tail section, she gets the cold shoulder from other Taillies as if she was crossing the picket lines and abandoning her cause while all Layton can do is look with heartbreak. The only one who can comfort him is Josie, who will eventually become Layton’s lover and a surrogate mother for Miles. Layton is woken from this nightmare by guards who put a black mask on him and escort him elsewhere.

In the front of the car, Melanie (AKA Mr. Wilford) is having a de facto meeting with the train’s heads of state in the first car. With resources dwindling and tensions from the murder, she has to name-check Mr. Wilford to get everyone to calm down and fall in line. Even just the mentioning of Mr. Wilford makes everyone perk up, as if he’s Jesus or something. The head of security can see through Melanie’s inspiring ruse as he knew she was quoting Winston Churchill from her “Mr. Wilford letter.” This leads Melanie to decide to push “Fight Night” ahead of schedule to distract the masses. Fight Night is exactly what it sounds like, two people beat the crap out of each other for the rewards of a train upgrade (and an upgrade in social status).

Layton’s brought before Melanie where she reiterates his place and his role as the Train Detective, and not to try and pass intelligence to the tail. Layton’s spent too much time on the other end of an interrogation, so he handles himself with ease. Layton still can’t get access to the first murder’s witness as the person is “unconscious.” However, he does get Melanie to tell him what the “Wilford rat” Sean Wise was informing on, which was exploring a “new” black market drug called Chrono. Layton laughs off the upper class saying it’s not a new drug as the Taillies have known about it f)or at least 2 revolutions. It’s very reminiscent of how certain drugs existed in poor black communities (The Taillies) for decades, but as soon as it hits wealthy white communities (the front of the train), then it’s a problem that has to be addressed. He then comments on their ignorance by saying “Oh you not getting a cut? Authoritarian states usually control their own drug trade.” Layton knows just how far to toe the line without getting himself into trouble, which is great to see Daveed Diggs and Jennifer Connelly go back and forth in their war of words. Layton knows that if they want to get to the bottom of the drug trade, the first person they need to investigate is Brakeman Oz, who trades the drug for oral sex, much to the surprise of Melanie and head Brakeman Sam (Mike O’Malley, who will forever be “Frog Guy from The Good Place).

Brakeman Bess, who had been assigned to Layton’s detail is out of uniform following his incident and decides to chill out with her girlfriend Jinju (Susan Park) who’s a part of Melanie’s inner circle. Once again, kudos to Snowpiercer for the LGBT representation and not needed to call it out.  After the two engage in sex, their pillow talk consists of Melanie starting to question some of the secrets of Snowpiercer as they pertain to the murder. It’s clear that Jinju knows a lot more as she slips up saying that the murder witness is “confused” instead of unconscious as Melanie told Bess. Jinju then tells Bess to let this go and of course, name drops Mr. Wilford. Jinju knows that Bess will continue, so that’s not going to be good for all of them, so she eventually dimes out her girlfriend to Melanie.

As Layton and Sam interrogate Oz, in which they both slap him in the head (Sam does for giving drugs for blowjobs, and Layton just because he wants to slap Oz), Oz tells them that he only gave the drugs as a “humanitarian” thing to help the woman whose arm was frozen off in last week’s episode. But it turns out that Oz has some underground connections and is quickly summoned to a “janitor” who is a big part of the drug trade. He assures the big boss that he didn’t tell anything about their operation but don’t underestimate Leyton as he’s a good cop.

As the rich celebrate “Casino Night” in the front car the Folger family (Robert, Lilah, and their teenage daughter LJ) are enjoying some R&R. Lilah tells Ruth from Hospitality that she can see through the ruse that everything going on is a distraction from the fact that things are starting to fall apart. Meanwhile, LJ shares a look with her security guard.

Bess interrupts Layton and Sam bonding on their similarities of loss when she reveals that she knows that Nicki is awake, so now it’s time to try and see what she knows. As Melanie is trying to figure out a resource problem Jinju rats out her girlfriend to Melanie. As Layton and Sam meet Nicki, Layton realizes that she’s not “recovering” but going through withdrawal from Chrono, and even has “Chrono Mouth.” Before they can get any answers, Melanie interrupts and asks for them to step outside. There they discover that Chrono is a street version of the suspension drug and Clint has been selling the suspension drug to make Chrono and gives it to the janitors. The doctor says he gave the substance for the drug to the janitors in trade for supplies to help people. Once again, in Snowpiercer, the system and all of its moving parts feed into one another. However, in the middle of them asking the doctor about the drug trade, Layton recognizes his son Miles’ hair in a bag, and he finally finds out that Miles made the apprentice program for the train and he demands to see his son. Melanie then takes him to see his son in one of the forward cars where Miles tells him all about his new program and the life that he’s going to have. Layton is proud of his son, and even prouder when Miles tells him that he’s still going to fight the good fight for the Taillies Thankful for being allowed to see his son, Layton convinces Bess and Melanie to let him attend Fight Night so that he can try and learn more about the janitors and their drug network. Melanie allows him to go as long as Bess accompanies him and keeps a watchful eye.

Fight Night happens and Layton (as well as us) gets to see yet another side of the culture on Snowpiercer as people go to the Night Car to see the future’s version of UFC. The citizens of the First-Class cars get to have an elevated seat as they watch the fight while everyone else cheers on the ground floor. Before the fight begins, Melanie gives an announcement to start the festivities and even has “Mr. Wilford” give a speech commemorating the even. Of course, Mr. Wilford is just a bunch of edited soundbites she uses a laptop to put his speech together, but the entire train eats it up as if it’s the gospel. As the fight begins, Layton notices his ex-wife working behind the bar and convinces Bess to let him go alone. While talking with his wife, he gets the Deetz on the janitors, especially their leader Terrance (Shaun Toub). Layton wants a sit down with Terrance, so Zarah makes it happen, but with Terrance, there’s a cost. Zarah gives Layton back his wedding ring, which she never trades (showing she still loves him). After declaring that he still loves him, they embrace and kiss, but he still is needed by the Tail section.

Word gets to Terrance, and after he first gets the run around from Oz, he and Layton have a face to face. He’s escorted to Terrance’s hideaway area (good to know there’s still crunk music on the train even during an apocalypse), and the two sit to talk. He lets Terrance know that Seas Wise was a Wilford informant and then the two work out a deal to let the drug flow continue as long as he helps him solve the murder. Terrance unlike many others, was an actual janitor before the world ended and explains that he used to clean a high rise and that Snowpiercer is just a vertical high rise. His knowledge of how the world works gave him an opening to take over the underground drug market. Terrance is also just as interested in revolution as Layton is. Terrance’s tip lets Layton know that whoever was with Sean Wise was someone from First Class., someone who “takes care of himself.” While they are talking Nicki shows up to the Night Car wanting to score some drugs. Members of the Folger family notice, and young LJ comments that “she’s not the murderer” as she glances at her security guard. When the fight (and subsequent riot) ends, LJ waves at Layton.

Layton holds his information hostage until he can get to see Josie in the Tail section. There he gets to talk with her and he tells her about how Miles is doing in the apprenticeship program. He then tells Josie how he feels for her and the two embrace and kiss (he gets to kiss two girls he loves tonight) before Melanie separates the two of them. Josie sits back down and then pulls an object out of her mouth, one of the same ones that were used as information/currency at the beginning of the episode. Layton’s finally given the Taillies some valuable intelligence. As Layton is about to tell Melanie what Terrance told him, a murder happens in the medical car as LJ’s security guard kills Nicki, the doctor, and Nicki’s security guard. It looks like the real murders are the uber-rich Folger family!