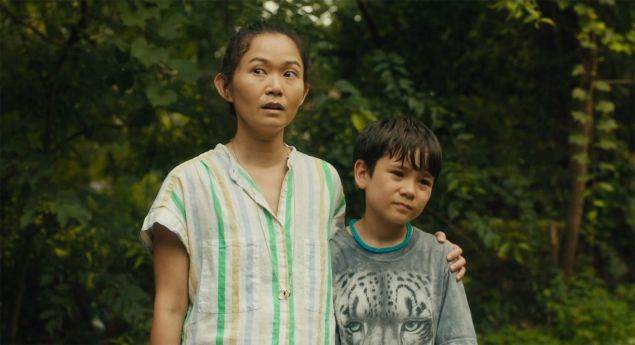 Driveways is the movie we need right now. In a time where Covid-19 keeps us far from each other, the coming of age tale feels like a warm hug. Written by Hannah Bos and Paul Thureen and brilliantly directed by Andrew Ahn, the film provides a warm and sincere sense of relief in these trying times.

The longline could easily make the film seem like a Hallmark movie:  A sensitive and lonely boy, helping his mom clean his recently deceased aunt’s cluttered house, bonds with an elderly war vet. Its nuisance is what makes it a home run. Hong Chau (Downsizing) plays Kathy, that single mom trying her best raising a sweet boy and dealing with not only the death of her sister but her sister hoarding habit. Her son Cody (Lucas Jaye), has always had trouble making friends and the transition to his aunt’s neighborhood is no different. On their first day there he receives help turning on the hose from a neighbor, Del. Renowned actor Brian Dennehy (Cacoon, Silverado) who passed away last month, plays him as a vet who has certainly seen some “shit” but still goes with the flow. Slowly over the course of the summer, Cody and Del become closer, talking about Del’s past playing bingo and reading manga. It should be too ordinary for an 80-minute feature, but its grounded reality is what makes it work.

Hong Chau brings out a side of the single mom archetype that we haven’t seen before. Her portrayal of Kathy, one of quiet grief and strength, anchors most of the film. Chau was nominated for an Independent Spirit Award for her performance and its easy to see why. Jaye plays Cody as a genuine kid, losing any “overacting” sheen that often comes with overacting. He seems to have chemistry with everything screen, easily keeping up with the two veteran actors beside him. 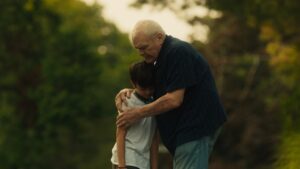 As one of Brian Dennehy’s final performances, his Del is honest, understated, and yet layered. Like everything in this film, his character is not romanticized yet we feel every emotion as he deals with losing the friends around him to age and bonding with Cody. Every person alive has met someone like Del and you leave the film better off for watching his performance.

Driveways is sweet but not schmaltzy or overdramatic. It’s a quiet slice of life about the relationships that shape us. Ahn handles growing up and growing old with a delicate hand, but not a serious one. He gives each character room to breathe, exploring what it means to be human, in the lives they lived. Where a lesser director could have turned this unlikely friendship story into a hallmark film, filled with forced emotion and melodrama, Ahn gives us a quietly moving story that’s a breath of fresh air.

Driveways is available on iTunes, Prime Video and On-Demand. Watch the trailer below