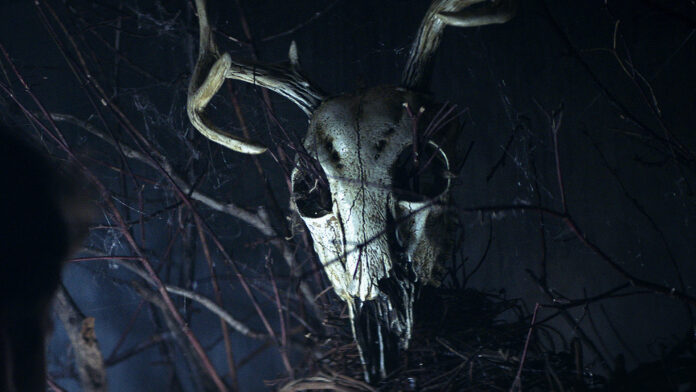 The Wretched is here to prove that the classics are classic for a reason, a witch can still be terrifying if the story is handled right. The IFC Midnight release follows a boy named Ben who’s spending the summer with his soon to be divorced Dad in a beach town…well, marina town. The days start out normal enough with Ben getting a job at the marina where his dad works, meeting a friendly girl named Mallory, waking up late, and catching glimpses of an unnatural demonic figure in his neighbor’s yard. Oh, wait, went too far there, that was right after things left “normal enough”. Naturally, no one believes Ben’s stories, even after the neighbors’ children go missing, even after the neighbors forget they had children at all. Witch in the woods stories haven’t been quite done to death but they’re past the point where you can make a lazy attempt and call it a success based on the subject matter. Thankfully, the Pierce brothers came equipped with just about every tool in the toolbox for someone making either a childhood adventure story or a chilling horror tale…or in this case, both.

I’m not 100% sure of what I expected going into this, but I can tell you what I wasn’t expecting…that Goonie’s feel. I would have thought it would be out of place and stick out but the end result is something altogether special and unlike anything I’ve seen in a while. Ben is just a few years younger then most horror movie leads, which gives the feeling that they’re not going to kill him, right? Well, the prologue pretty much dismisses any lines you thought wouldn’t be crossed, so for the first time in a long time I was left feeling like anything could happen. Then there’s the monster, or in this case witch. Witches…not really something I’ve ever included on my fear list, they’re always more Hocus Pocus then Blair Witch. The Wretched however takes the nastiest version of that iconic archetype and melds it with the most disturbing J-Horror baddie you can think of. The constant scenes of the hands emerging from somewhere they shouldn’t be is enough to keep you up at night.

The Wretched is available Today, May 1st, on VOD

For more of our coverage on The Wretched click here!