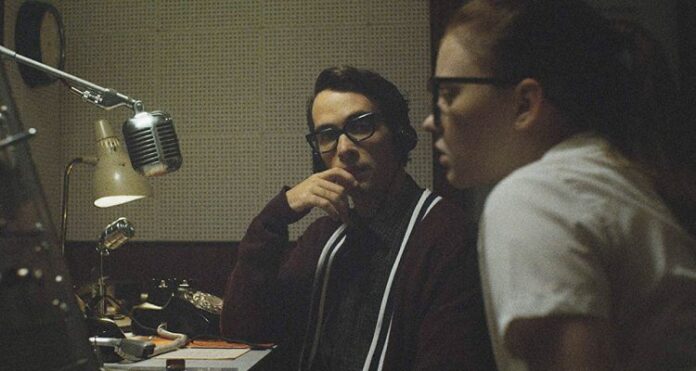 Andrew Patterson’s delightfully weird, atmospheric The Vast of Night plays like somebody trapped within The Twilight Zone watching an episode of The X-Files. Set in the UFO-crazed 1950s, it’s a film that will leave you swooning with extraterrestrial suspense and mystery, Cold War conspiracy theories, and government paranoia. While at its core this is a story we think we’ve seen a million times before, Patterson plays with genre to create something wholly unique and fascinating.

A voice akin to Rod Serling introduces us to The Vast of Night, which takes place in a small New Mexico border town. It’s one of those places where the people are connected by a single switchboard operator, everyone attends the high school basketball games, and where the introduction of one of those new-fangled cassette tape recorders can cause the town to buzz with excitement. The first 20-minutes is basically an extended walk-and-talk between Fay (Sierra McCormick), the town’s nighttime switchboard girl, and her friend Everett (Jake Horowitz, brimming with offbeat Sam Rockwell energy), radio DJ and raconteur. This brilliantly-crafted sequence sets up the pervasive shadowy mood of this sleepy little place that we know is about to be woken up from its slumber.

A strange frequency begins coming through the switchboard, cutting off the signals to callers and, ultimately, Everett’s radio show. Then the calls start coming in. Something strange has been seen in the night sky. You keep waiting for reports of people disappearing, but Patterson, along with screenwriters James Montague and Craig W. Sanger, don’t need to go that far. They have trust in the audience to use their imagination. Soon, Fay and Everett begin racing around the city, locating people who claim to have information on the signal’s true nature, hinting at a conspiracy that has been going on for years and is bigger than the two scrappy teens could possibly imagine.

Patterson grips you with the promise of alien invasion, but it’s the retro aesthetics and the build-up of suspense that hooks you for the long haul. Shifting gears frequently, the film sometimes is presented like it’s being watched on an old-fashioned TV set, before sucking us directly into the episode. That’s just one of a variety of effective visual cues that catapult us from one gripping moment to the next, but at no point does the obsidian cover of night ever leave. Even during long, extensive monologues, Patterson finds ways to keep the spookiness factor high, cutting completely to black so the words hang in the air as if they were said by a deathly spirit. Deft editing and sound design add to the tension at every turn; while a film that moves at its own leisurely pace, The Vast of Night is thrilling from start to finish.

This is the kind of bold, confident debut that careers are built on. Patterson makes the most of a limited budget, ratcheting up tension through ominous tracking shots that pull us in so deep we feel as trapped in the night’s oddities as Fay and Everett. Speaking of which, the casting here is also on point. McCormick, sporting giant glasses that capture her wide-eyed fascination, is a ball of pure energy. Horowitz has the unstoppable motormouth and roguish vibe of the aforementioned Rockwell. Together, Fay and Everett make a fascinating, quirky pair of amateur detectives. If The Vast of Night had franchise aspirations we’d want to follow these characters to their next big mystery. It’ll probably have to do that we can follow Patterson to whatever he does next, because I predict big things are in his future.

The Vast of Night is available now on Amazon Prime.