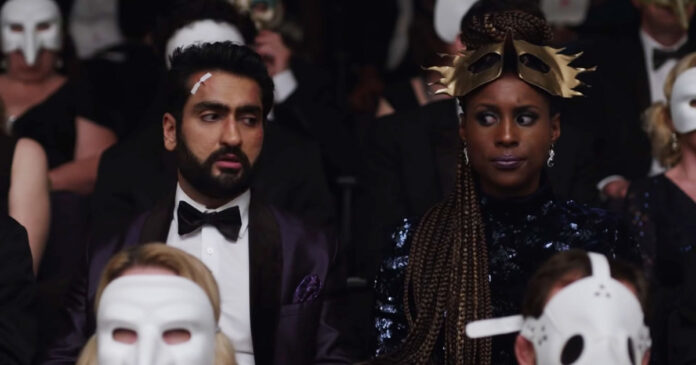 First off, I want to live in a world where Kumail Nanjiani and Issa Rae are a real-life couple. Can that happen? These two are so much fun to watch in the goofball comedy The Lovebirds that we could use a little more of that in the world right now. Instead, we’ll just have to settle for the 90-minutes of hilarious bickering, rom-com spoofing, and undeniable heat-generating these two have in one of Netflix’s smartest acquisitions.

The thing is, I’m not completely sure The Lovebirds would’ve performed that well in theaters under the best of times. Comedies like this tend to be overlooked nowadays. We’re a decade away from the box office success of Date Night, a film The Lovebirds clearly owes a lot to. But in the comfort of home, who the Hell doesn’t want to watch Nanjiani and Rae, already two of the funniest people working today, do a mock sendup of Eyes Wide Shut? If your hand is in the air, we can’t be friends anymore.

They generate undeniable, offbeat chemistry in the opening scene as Jibran (Nanjiani) and Leilani (Rae) are in the morning glow of what appears to be a one night stand. As happens in those situations, they’re awkwardly talking out what comes next, but they have exactly the same sense of humor. There’s nothing they can’t find a reason to make fun. They’re too much alike to stand to be out of one another’s sight for very long.

Cut to four years later, and what brought them together is now what’s driving them apart. They can not only joke about anything, but they can fight about just as much. Such as, she thinks they should be on The Amazing Race, and he thinks that’s a terrible idea. He makes documentaries but hates reality shows (“You make documentaries. Those are just reality shows nobody watches.”), even though he doesn’t watch them. She has a co-worker he doesn’t like because he retells Katt Williams jokes. He gives annoyingly pointed Yelp reviews, always negative, and Heaven forbid the food be salty. (“being mouth-fucked by the Dead Sea” is one great take he has).

The plot of The Lovebirds isn’t deep at all, and we know where it’s headed. The moment they realize the relationship is over, they literally go crashing into a murder mystery involving a secret cabal of mask-wearing deviants, a serial killer (Paul Sparks) on the loose, and oh yeah, Jibran and Leilani are fingered as suspects. What was a breakup comedy is now an action-comedy, a genre that is about as ill-fitting for either star as it gets. It’s one reason why Nanjiani was so perfectly cast as half of the oil ‘n water pair in Stuber. He’s so great at expressing his discomfort of ANY situation, especially if race factors into the equation. And some of The Lovebirds’ funniest gags make light of the cultural differences between Jibran and Leilani.  Rae is fierce as ever, going toe-to-toe with Nanjiani and there’s just this way in which her words are more cutting than they intend to be.

From there, The Lovebirds is about moving Jibran and Leilani from one absurd setpiece to the next, and some work better than others. But it finds laughs both when it slows to a crawl, like when they are forced to play intimidators to a frat-house full of dim-witted accomplices, and when it goes wildly over-the-top. After delving a little too deep into the criminal underworld, they find themselves kidnapped, tied up, and forced by their captors (Anna Camp and Kyle Bornheimer) into a Sophie’s Choice situation. A pan of hot bacon oil to the face, or whatever is behind a shut door. Even in this heightened anxiety Jibran and Leilani can find a reason to squabble, actually, the circumstances make their fights worse, but the whole thing is so ridiculous it’s tough not to find it, and the resulting consequences, humorous.

At no point in time does The Lovebirds ever feel dangerous. Stakes are pretty low, far lower than Nanjiani’s breakout comedy The Big Sick, also directed by Michael Showalter, and even less than Rae’s recent romance The Photograph. And all of that is fine, but a little more edge and less formula wouldn’t have hurt. The Lovebirds isn’t aiming higher than it needs to, yet still hits the comedy sweet spot that’ll leave you feeling good, and like the Netflix subscription is worth it, when it’s over.