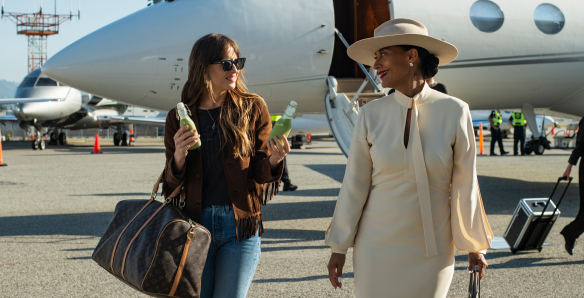 Comparisons to The Devil Wears Prada will come easily for Nisha Ganatra’s music-industry comedy The High Note. But with its less-devilish, just as high-maintenance boss and lighter humor it’s more in harmony with Ganatra’s previous film, last year’s Late Night, in which another young upstart seeks to make it big in a field that cares more about the aspirations of men than women. It’s a smart, witty, film that features Dakota Johnson in another pleasantly doe-eyed performance, although she’s repeatedly upstaged by the savvy, chic, and passionate Tracee Ellis Ross.

The High Note is about two women trying to figure out the next stages of their careers; Grace (Ross), the superstar singer and all-around diva who has lost her creative fire, driven into repeating the same covers (Covers being the movie’s original title) of her well-worn hits because that’s what people want to hear. The other, Maggie (Johnson), her beleaguered personal assistant with a music background and aspirations of being a record producer. Maggie is one of those only-found-in-Hollywood-movies characters suffering the “L.A. struggle”, meaning she says she’s barely getting but seems to be suffering no actual hardships. Her apartment, which she shares with a nurse friend (Zoe Chao, at her irascible best), looks like it was pulled straight out of a magazine for the rich and famous.

The High Note works best when Johnson and Ross can play off one another, keeping the focus on the movie’s core relationship between Maggie and Grace. While a love of music is what bonds them, the tighter connection is they are both women who have aspirations bigger than the industry seems to want for them. Ice Cube plays Grace’s pushy longtime manager, who is trying to urge her into a Vegas residency and a live album of classic hits, basically everything she doesn’t want to do. Maggie sees the potential in a brand new album, which she would produce, naturally, and while Grace wants to do it she got smacked with bad reviews the last time she did something fresh. Fear has stifled the veteran, while the youngster is a little too gung-ho.

Diversions into less-rewarding subplots stifle The High Note far too often during its two-hour runtime. While Kelvin Harrison is charming and surprisingly soulful as a rising star with a wary attitude towards the business (she meets him performing outside of a high-end grocery), his arrival pulls Maggie away from Grace as she takes on the added burden of becoming his producer. It also introduces a number of lousy sitcom situations in which she’s forced to lie (frequently) to everyone around her as she juggles both of her careers. A late-in-the-film twist is such a cockamamie pile of nonsense it’s hard to believe screenwriter Flora Greeson came up with it, as if a movie about two supremely-talented women making their mark in the music biz wasn’t enough.

This is Ross’ first major film in years, and she plays Grace like a cinematic version of her own mother, Diana Ross. She is R&B royalty, a queen of the stage who knows exactly how fierce she can be, but has ceded too much control to maintain her comfortable place on the throne. It’s a dynamic, powerful performance by Ross, and those who love her attitude, voice, and sense of style will be into it from the opening number. Speaking of which, the movie’s jazzy, bluesy soundtrack is another win, with Ross and Harrison capturing the breezy feel of the L.A. music scene.  Johnson is good, as well, but like many of her past characters you’re pushed to the edge of frustration at Maggie’s naivete. Johnson knows how to play that role and play it well, and to be fair, she gives Maggie a believable transition from musical bystander into a creative force of her own. When the screenplay stops trying to convince us that Maggie is really toughing this one out (Even her father, played by Bill Pullman, is a radio DJ of some renown. She ain’t hurtin’.) she’s a likeable enough character.

The number of successful female music producers is astonishingly small. The older women get, the tougher it is for them to be taken seriously. In one of the movie’s best moments, Grace explains just how high the odds are of being successful later in one’s career, and the odds grow virtually insurmountable if you’re black. The High Note really hums when it uses humor to deliver these moments of insight, letting us into the anxieties and concerns that women must face even when at the top of the charts. When combined with a snappy soundtrack and a dash of fairy tale wish fulfillment, The High Note is worth singing about, even though it could’ve been more.