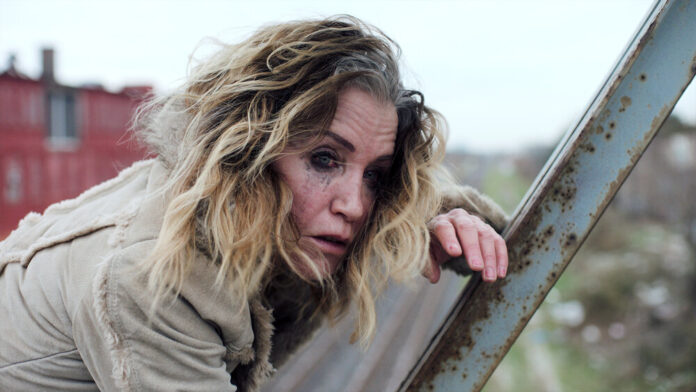 On the 29th of every month, when the welfare runs out, Catherine MacDonald (Anastasia Phillips) talks her alcoholic mother Tammy (Felicity Huffman) off of the same bridge. Literally. Catherine, a connoisseur of bad decisions, dreams of being successful. At anything. Tammy, her mother, has been so poor for so long all she can do is party about it. When Tammy is diagnosed with terminal cancer Catherine is forced to move in and care for her. Enter Ilana, a glamorous purveyor of talk-show tragedy porn who wants to help Catherine publish her life story. Caught between sacrifice and selling out, Catherine must decide if life without Tammy is really a better life.

Amy Jo Johnston has made quite a name for herself throughout the course of several decades, perhaps best known for portraying the Pink Ranger, Kimberly Hart, in the original television series of the Mighty Morphin’ Power Rangers. However, it was not until 2013 that she started to direct some films as well as star in them. Over the years, she has directed such films as Bend, Lines, The Space Between, and now, Tammy’s Always Dying – a powerfully deep, thought-provoking, and oftentimes emotional film that has a rocky start, but eventually finds its footing.

One of the reasons why this film works as well as it does is because of the script from Joanne Sarazen, who has only penned shorts in the past. It’s frequently hilarious while also not getting too funny so that it distracts you from the overall core of the story. One minute you’ll find yourself laughing and the next you’ll find yourself getting a little bit sad in all the best ways.

However, yes, it does start off relatively dull and slow and stays that way for the first twenty-thirty minutes. It starts rather quirky and for a while, it can become tremendously unclear as to where this story is going to go and what it’s really about at the end of the day. Luckily though, after the first couple of scenes are out of the way, the film picks up greatly and from there, becomes interesting and gripping.

A lot of the movie’s intrigue and heart come from the lead character, Tammy, portrayed by Felicity Huffman in incredible style. This is without a doubt one of her best performances in years, as she is asked to do a lot with this role, and pulls it off completely. She gains your sympathy but she is also a character that feels a little bit mysterious. The more we learn about her, the more interesting the film as a whole becomes.

The dynamic between Tammy and her daughter Catherine was also one of the highlights here. Much like Huffman, Anastasia Phillips delivers a truly terrific performance as a woman who is just trying to do her best to take care of her mother even though it can be stressful, to say the least. The chemistry between these two actresses was great to see.

And so, while this movie does take a little bit of time to find its footing, in the long run, it worked tremendously. It does feel relatively short, too, clocking in just a few minutes short of ninety minutes. But, nevertheless, this is a remarkably impressive feature from Amy Jo Johnson with two truly powerful lead performances and a story that will grab your interest.

Tammy’s Always Dying takes a to get going, but when it does becomes a funny yet emotionally thought-provoking film with two great lead performances.