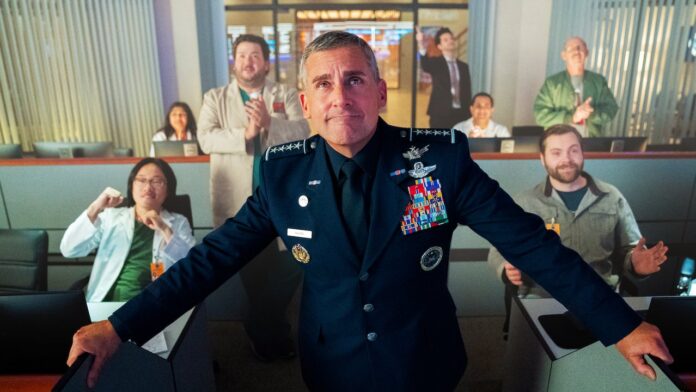 In 2018, President Trump announced a new branch of the military, one that would militarize space. Instead of rolling their eyes and making jokes on twitter like everyone else, actor and comedian Steve Carell and writer Greg Daniels decided to turn those jokes into a script called Space Force. With it, they ask, “What would a Space Force actually look like and how would it run?”

Following the lives and shenanigans of those sworn to protect and fight for us among the stars, General Niard is an alien out of orbit in Wild Horse, Colorado. Dealing with a shake-up in his marriage at home and teen angst from his daughter (Diana Silvers, Booksmart), he must also figure out how to navigate the many personalities and struggles that come with running a whole military branch. There’s the head scientist, driven by reason and moral obligation (John Malkovich), and his underlings (the main one played by Jimmy O. Yang from Silicon Valley and Crazy Rich Asians). There are the “spacemen,” completely unprepared soldiers who will fight for the American dream in Space. There’s an unpredictable President, commanding overall, completely unseen. All to get “boots on the moon.” Trying to be the bridge between a Veep like political satire and workplace comedy like The Office, (to which creators Steve Carell and Greg Daniels are known for), the series ends up fumbling, taking giant leaps where it should have taken smaller steps.

When Space Force tries to be a biting satire or a relationship comedy, the show works. Whether it’s with the show’s version of Alexandria Ocasio-Cortez or the clear pettiness of our actual president, the show is genuinely funny. When it comments on the bureaucracy of running a military branch, like which gun should be the official weapon for mass shootings on the moon, it’s genuinely funny. Later in the season, when the comedy starts to come from characterization, it’s genuinely funny. It’s when the show gets caught in the tedium of military procedure and the petty politics of it all, it feels too real and a little boring.

A good example of this is in episode 5 when the branch squares up against the Air-Force in a mock-battle. The characterization is still being developed, the whole episode focuses on this one event, and there aren’t enough zingers parodying our government for the comedy to land. The issue clearly comes down to writing rather than direction, as the next episode, one of the season’s best and emotionally satisfying, were both directed by acclaimed filmmaker Dee Rees (Mudbound).

Like an actual dying star, the show’s star power is really dense and at times weighs everything down. Jane Lynch, Patrick Warburton, Noah Emmerich, and Kaitlyn Olsen pop up and are given varying degrees of too much and too little to do. Lisa Kudrow’s role however doesn’t pay off. As Naird’s wife Maggie, she’s not on screen enough for her character or her performance to be fleshed out, coming off as one-note. Fred Willard gives us the comic relief he is known for as Naird’s ailing and slightly deranged father. It’s a bittersweet final performance for the comic legend who past away on May 18th.

Though are a few storylines that Space Force would be better without, which seems to be pretty normal for a Netflix show, the main cast tries their best with the material. In her first real big television role, Tawny Newsome gives a reserved but strong performance as Captain and Spaceman Angela Ali. Though the show doesn’t really know what to do with her or the equally endearing Jimmy O’Yang until the latter half of the season, when they do find a space for them, the knock it out of the park. Arguably the heart of the show, John Malkovich is given the opportunity to play a calmer role than we’ve seen from him, one as a logical scientist, a complete foil to Naird’s General. Malkovich still finds ways to be John Malkovich, yelling when provoked and being a smart ass. However, he still provides a lovely performance that will get you through the first couple of shaky episodes.

Carell, on the other hand, has the reverse effect. As the well-meaning General, who has good instincts and no idea what he’s doing, he takes a couple of episodes to find the character’s complexities. Not knowing whether to play him as a complete doof at first, Carell eventually gets the audience on his side but with plenty of turbulence during the show’s takeoff.

There are a surprising amount of musical moments for a show about militarized space. From Carell’s wonderful falsetto covering Newbeats’ “Bread and Butter” to Malkovich’s sweet lyrical rewrite of “What A Wonderful World,” the device works surprisingly well. It adds charm and emotion to where the show was lacking.

Overall, if you like comedy, are a fan of The Office, or slight political satire, the show is worth checking out. However like the actual Space Force, the show struggles to justify its execution.

Space Force will premiere on Netflix this Friday. You can watch the trailer below.