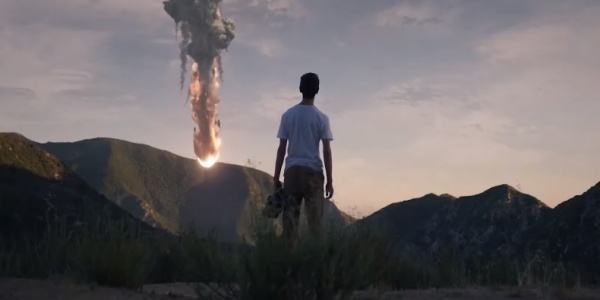 We live in a world where we are basically oversaturated with deeply depressing with dark themes. That’s not a bad thing at all, though, don’t get me wrong. In fact, my favorite movies of all time are those that make you think long after the credits roll. One of the best examples of a science fiction movie, in particular, being immensely interesting and enthralling all the way to the end is Stanley Kubrick’s 2001: A Space Odyssey.

But sometimes, you just want to watch a movie that is going to entertain you and will leave you feeling perhaps a little bit nostalgic. Eric Demeusy’s Proximity is exactly that type of movie and it’s such a delight. It never really takes itself too seriously and instead opts for more lighthearted thrills while also managing to tell a compelling story of love amidst the alien story.

One of the reasons why this movie works as well as it does is thanks to the performances from the two lead actors, those being Ryan Masson and Highdee Kuan. Together, they deliver some of the strongest performances of the entire year thus far. They are asked to do quite a bit emotionally, oftentimes having to show their emotions with just facial expressions and they make it look easy.

Not only that, but their chemistry together felt quite strong. It genuinely seemed as though they had known each other in real life for many years and were close friends. In addition to that, their characters were developed in satisfying and interesting ways. By the end of the film, I did find myself wrapped up in their stories and I was glad that I was able to go on a journey with them.

Although that journey is incredibly fun and gives off major Steven Spielberg vibes in all the best ways, this movie can be a little bit too goofy for its own good at times. There are several scenes in which our protagonists are on the run from futuristic soldiers complete with laser guns and everything. These scenes sadly broke a lot of tension that was otherwise planted very well within the movie’s storyline.

Furthermore, the main villain here was not only quite predictable but was similarly corny and over-the-top. The motivations behind why they are doing what they are doing aren’t ever made too clear, and instead, they come across as one-note and incredibly flat.

But none of that takes away from the fact that this film was, as a whole, quite entertaining and is a greatly lighthearted watch. It won’t grip you and take you on a rollercoaster ride of emotions or anything like that, but it will more than likely put a smile on your face and will even make you nostalgic thanks to its influences from 80s films such as E.T. The Extra-Terrestrial. How can you go wrong with that?