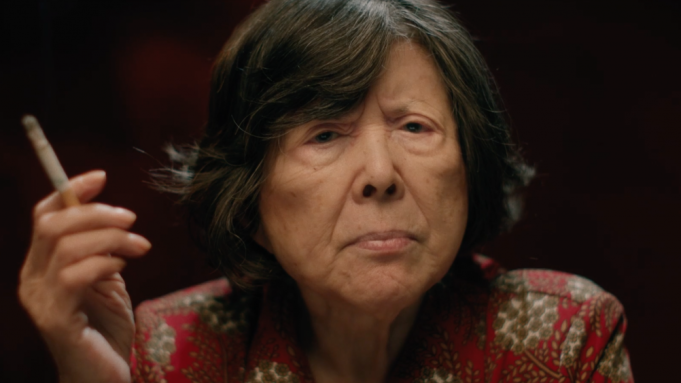 In the heart of Chinatown, New York, an ornery, chain-smoking, newly widowed 80-year-old Grandma (Tsai Chin) is eager to live life as an independent woman, despite the worry of her family. When a local fortune teller (Wai Ching Ho) predicts a most auspicious day in her future, Grandma decides to head to the casino and goes all in, only to land herself on the wrong side of luck… suddenly attracting the attention of some local gangsters. Desperate to protect herself, Grandma employs the services of a bodyguard from a rival gang (Corey Ha) and soon finds herself right in the middle of a Chinatown gang war.

The concept of Sasie Sealy’s Lucky Grandma is quite insane indeed. It sounds like a movie that would never ever work. Like something you’d see on an even stranger episode of Black Mirror or something along those lines. But as crazy and outlandish as it may be, it actually works quite well thanks to numerous elements at play.

Namely the lead performance from Tsai Chin as the titular grandma. Here, she feels completely and wholly intimidating from the very first moment you see her all the way up until the end. It is without a doubt one of the strongest performances of the entire year thus far. She is asked to do a lot here, and she manages to pull it all off.

Grandma is a character that you feel could be extremely dangerous and deadly whenever she feels like it. Don’t let her old age fool you. Just because she is elderly doesn’t mean she couldn’t harm you at any second. The cold, scary look in her eyes that stays constant throughout the running time was fascinating.

But aside from Chin pulling off a remarkable performance, the story as a whole was quite entertaining to watch unfold. It starts off a bit rocky with a little bit of setup, and it does take a while to get going and it’s hard to get invested right away. Luckily though, the story picks up greatly in the second act with plenty of gripping and intense plot beats that will keep you intrigued the rest of the way through.

In addition to all of this, it’s also an impeccably shot film with director of photography Eduardo Enrique Mayén putting a ton of focus on wide shots and extreme close-ups that look absolutely stunning. The look of Chinatown is incredibly eye-catching and is filled with tons of vibrant colors as well.

Does it have its hiccups along the way? Sure it does. But then again, what movie doesn’t? It suffers from pacing issues early on and does take a while for things to get interesting, but once things get going, it becomes a relentlessly entertaining and oftentimes gripping viewing experience.

Lucky Grandma suffers from some pacing issues but nevertheless tells a gripping and compelling story further boosted by the talent of lead star Tsai Chin.